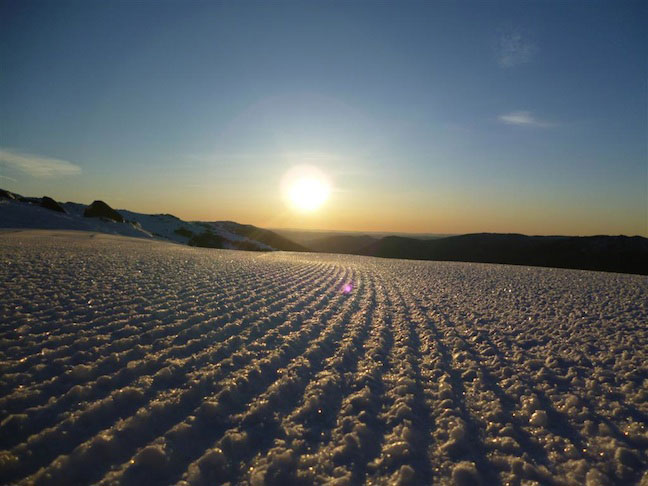 Balmy days and sunshine are nice for a time but cold and snow is what we all crave – Thredbo, 29 July. Image:: Thredbo

It’s been extremely warm in the mountains this week as a warm northerly flow chews away at the snow pack. When I looked at our forecast maximum temperature of 8 degrees at Perisher on Tuesday I was initially sceptical, only to see the max come in at 8.2 degrees. And we’re expecting even warmer conditions today (Wednesday) and tomorrow.

Combine that with some manky cloud and showers over the weekend, difficult conditions for snowmaking, and the fact that it’s several weeks since we received our last big dump of snow, and it’s understandable that everyone’s starting to hang out for some fresh.

And so when Mountainwatch’s automated forecast model suddenly threw up the possibly of 80cm of snow this weekend, and then trimmed that back to just 10cm on the next issue, we had plenty of people hitting up our snow reporters on the ground and asking “what gives?”.

In fact, if you’ve been following the 7-day automated computer model forecasts on Mountainwatch the last few days you might have noticed just how volatile the forecasts for snow on the weekend have been, making large jumps with each successive forecast issue.

So why is the model being such a snow tease?

Well the first thing to note is that we’ve been talking about a weather forecast 6 and 7 days into the future. It’s not at all unusual for computer models to significantly change their tune that far in advance. It’s just that usually they get away with, because nobody’s looking so closely.

Of course the situation is different this week: in the middle of a mini snow drought and with fine weather and super-warm temperatures in the immediate forecast, snow lovers have been looking to the horizon for some relief.

Secondly, we’re in the middle of a weather pattern that’s making it very hard for different weather models to agree on how things are going to play out. The culprit is this high pressure system in the Tasman Sea that’s been holding firm like a rock for several days now, and forcing several promising cold fronts in the Bight to slide away to the south-east, rather than sweeping up over the resorts.

Meteorologists call this process “blocking” and it is forecast to continue later this week as a deep low pressure in the Bight grinds to a halt and deteriorates before it gets a chance to surge up over Victorian and NSW alpine areas.

Now here’s the rub: Computer models can’t agree on exactly where this weakened low pressure system will travel over the weekend. For example, here’s the Bureau of Meteorology’s model forecast for 10pm Saturday, compared to the GFS model from the US. 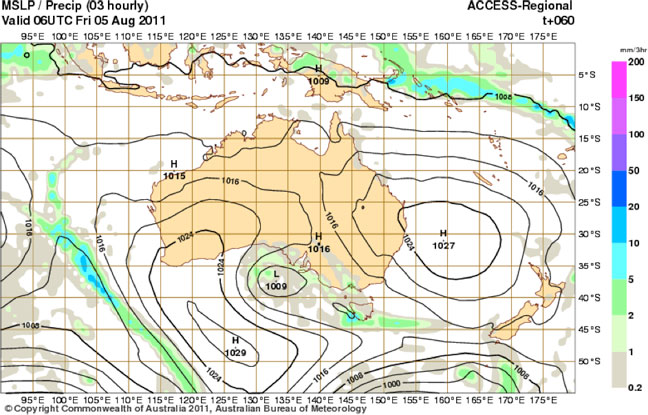 You can see that both models have a high pressure system around 1033hPa south of Australia, and another high around 1024hPA in the northern Tasman. But in between these two features, the BoM have a trough of low pressure extending across New Zealand’s South Island across the Tasman to Australia’s east coast, and a small low pressure circulation at 1016hPa. This is driving extra rain and shower activity on the coast that would also be making it inland to the resorts as snow showers. The American model, on the other hand, is not so keen on this trough, keeping pressures much higher thanks to that blocking high, and presumably forecasting much less cloud and rain.

So you can see there’s disagreement in the models, and this is not unusual at four or five days in advance. The disagreement on Saturday was even more pronounced yesterday.

Now step back a day or so, to when this low pressure system in the Bight is spinning around with nowhere to go, and the models are starting to disagree on exactly where it will end up. Here’s 4pm Friday from the BoM model: 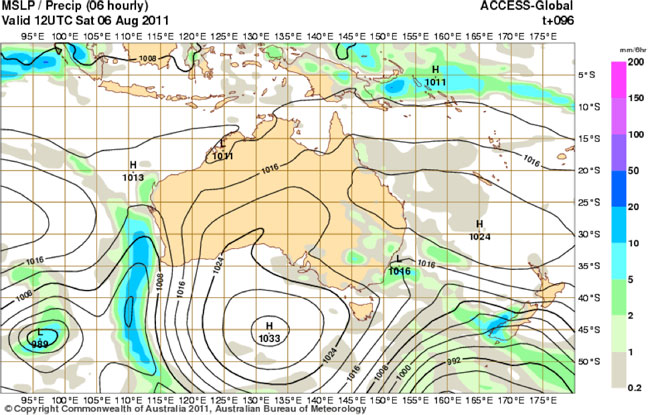 You can see a thin band of rain over NSW and VIC that’s been driven by this low. Our problem is that the position of this band of rain has been changing by a few hundred kilometres each model run, depending on exactly where the low pressure system is located.

Because it’s a stationary low, and not a bulldozing cold front, the band of rain is slow moving. So what happens is that if you get that band of rain sitting over you, you will get heaps of rain/snow. But if it’s several hundred kilometres to the west to the resorts like in this image, you get diddly squat. Put it another way. Stand in front of the guy firing the gun and you’ll get pasted. Step a metre to the left, and it’s someone else’s problem.

And that’s why the snow forecasts for 6 and 7 days out in the Mountainwatch model have been so volatile in the last 48 hours: Slight changes in the position of the band of rain, causing massive variation in forecast rainfall/snowfall.

As we get closer to the event, the models will become more certain about what’s going to happen. But slow moving low pressure systems like this always cause a bit of heartache. Come back on Thursday morning, when we’ll publish a detailed forecast update with the latest on what we can expect.

That’s all from the Grasshopper.