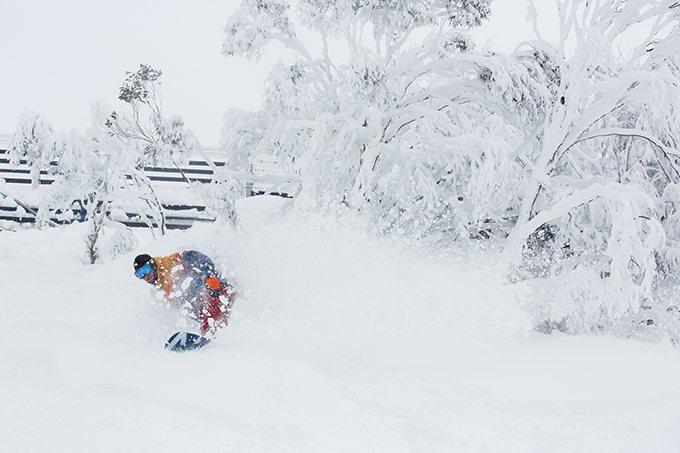 The storm is now known as ‘The Blizard From Oz’, didn’t just top our season so far, but is being hailed as one of the biggest dumps of the past decade. Image:: Thredbo

This time last week, what’s become referred to as the #blizzardofoz had just kicked off. Fast forward a week and what can only be described as some of the most memorable conditions have prevailed since, with well over a metre of snow falling from Thursday, 3 August to Tuesday 8 August and the superlatives about the snow quality have been flying thick and fast. While snow conditions have been pretty good since school holidays thanks to a few smaller snowfalls and a lot of wind, this was the first big storm of the season as a low pressure system with three embedded cold fronts crossed the mountains over a five-day period.

Things took a while to get going over the first couple of days, but when the third and strongest front hit last Sunday it was definitely the storm of the year and there were some incredible conditions from last Sunday through to Tuesday afternoon. 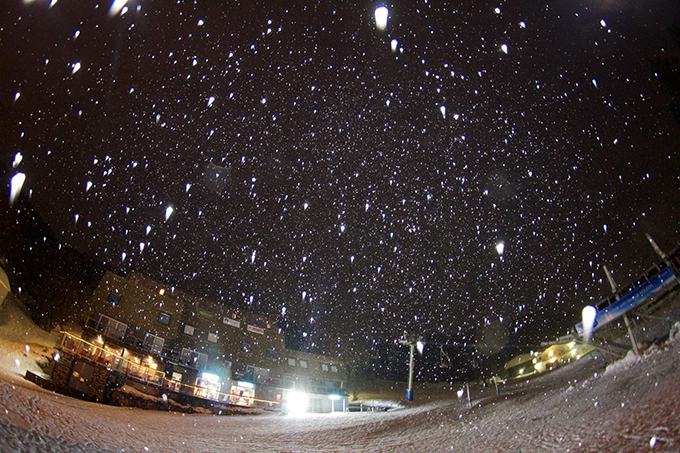 As night fell on Thursday, we waved goodbye to the sunshine as the first flakes began falling. Image:: Falls Creek

The first front came in last Thursday night and was lacklustre, dropping 10cms of snow above 1800 metres with rain and sleet on the lower slopes. Suspense. The skiing on Friday was good although the snow was a little heavy below 1700 metres. On Friday night another front crossed the mountains dropping a decent 20-25cms above 1600 metres and with the temps down to -4 around the peaks here was some nice dry snow up high. It wasn’t a weekend for fair-weather skiers there if you if you had the right gear and don’t mind putting up with poor visibility and strong winds the rewards were there. Having said that the strong to gale force NW winds caused a few wind-hold issues, particularly at Perisher, the result being some very long lift lines at the T-bars.

At this stage, the focus was on the third and final front due on Sunday, which was expected to be the strongest and coldest. The Grasshopper had been on the money with snow levels and accumulations with the first two storms and his forecast for Sunday had anticipation at a high level: 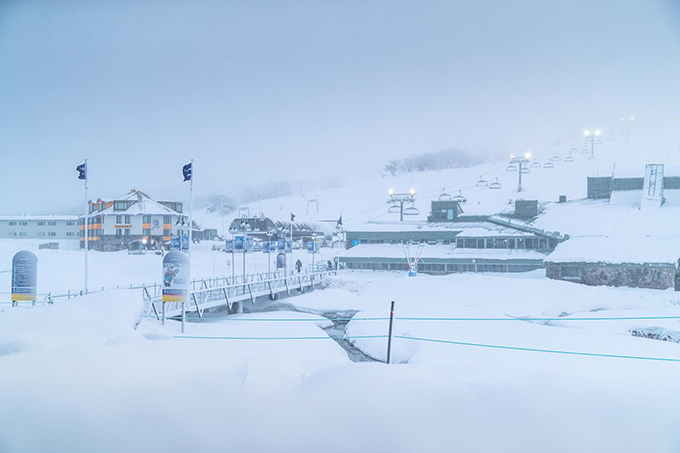 As the day progressed at Perisher on the Friday, the weather would worsen and continue that way into the weekend. Perisher’s bevvy of surface lifts enabled skiers and boarders to access quality snow and terrain without copping the brunt of the weather. Image:: Perisher

“Severe gale force north-westerlies will rip across the peaks this evening and overnight. This in advance of a second, more powerful cold front racing in from the west as a complex low heads for the Bass Strait/Tasmania tomorrow. This low will give us the heaviest snow of the season tomorrow – driven in by strong to gale force north-westerlies. 25-40 cm will fall down to 1200m.”

Overnight Saturday saw around 5-10cms in most resorts, a few light snow showers and string NW winds, gusting up to 100ks at Thredbo top station. That was little disappointing, but the Grasshopper wasn’t fazed: 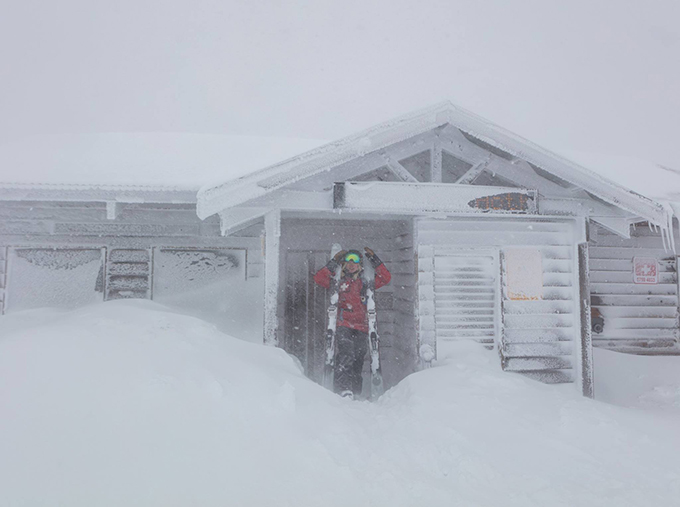 “In a nutshell today will be one of those days in which the resorts are turbocharged for the rest of the season. Snow will push in later this morning to give us blizzard conditions this afternoon as a complex low rattles across the Bass Strait/Tasmania.” 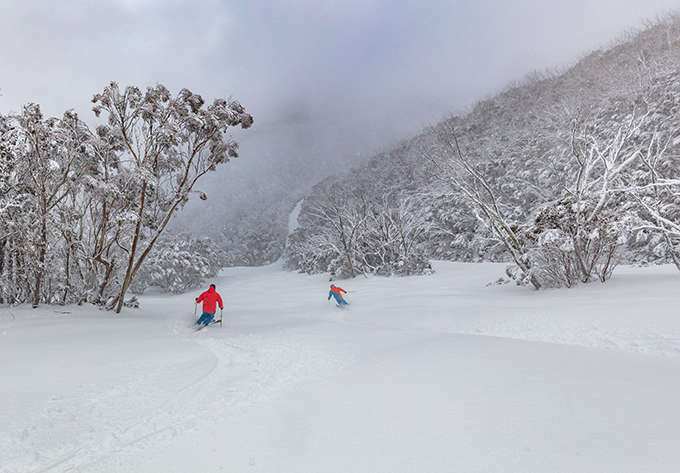 Come sunday, the crowd that ran to the hills would hide in the trees, staying out of the gale force winds as snow stacked on the ground – and their effort were rewarded but green pastures did remain. Image:: Hotham

The radar was showing a big blue blob heading towards the mountains and the snow started falling in the Victorian resorts in the morning and then hit the NSW resorts around midday. I waited until 2pm to head out and by that time the weekend crowds were off the hill, it was snowing hard and with a moderate WNW wind, the snow was filling in and every run was fresh tracks. Visibility was poor, so it was all about skiing the trees, and it was an afternoon to remember – nothing like skiing the storm.

The snow kicked in for a while, before easing around 10pm. Then in the early hours it really set in and by 6am there was 40cms across the resorts. It was going to be a special day and Bill Barker, our Hotham snow reporter said it all in his report:

“Crikey! I hope you have saved something in the tank…as this could be the day of the decade?? Wait for it…. we have had 46 cm of cold dry snow in the last 24 hrs with more than half of that coming overnight and it is still snowing heavily this morning … grab your fattest skis or powder board and get out there” 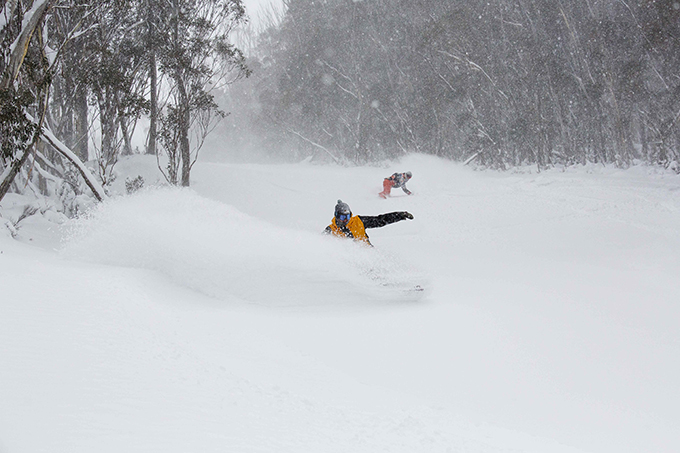 By Monday, there was so much snow on the ground that the expression ‘no friends on a powder day’ was abandoned in Thredbo. Image:: Thredbo

Monday turned out to be pretty special, particularly the first few hours with deep light snow and some epic powder turns, and there quite few tales told in the resort bars that afternoon.

The snow finally cleared off overnight Monday with around 5-8cms on Tuesday morning. It was clear and cold and with the temp down at -7 the moisture had been sucked out of the snow and it was another magic day. The off piste snow was super dry and even where it had been chopped up it was fun to ski and when the wind picked up it only got better. Maybe not quite as good as Monday, but for a sunny day it was pretty special and I’ll leave the last quote to Thredbo local and two-time Olympic downhiller Jono Brauer:

“Monday and Tuesday were different types of days, but equally as epic. Monday morning was snowing and had some of the lightest snow you get anywhere. Tuesday was sunny but cold with soft dry winter snow. Then the wind turned NW and the wind-blown powder was like silk. Sponars and the Bluff were incredible, as good as it gets.” 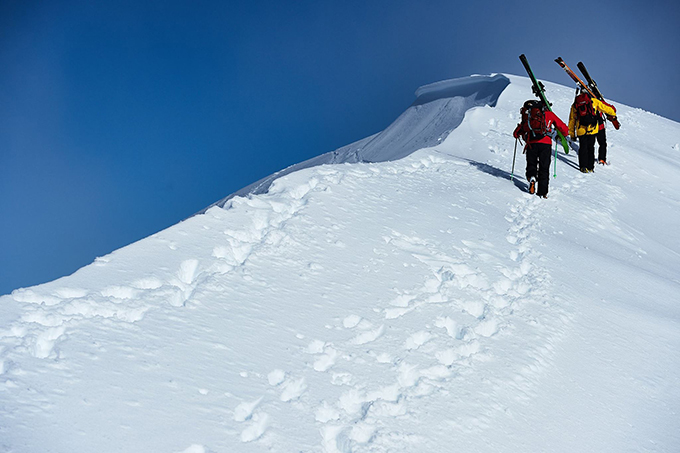 With sun filling our days since Tuesday, we gave thanks to the #theblizzardfromoz, as more snow makes it’s way to us this weekend. Image:: Buller