Howdy! The 7th Annual Transfer Banked Slalom took place on Friday, 13 August marking itself as the staple race and event of the year.

Cowboys and cowgirls from all age categories, actually 250 of them, corralled up at Thredbo Resort for a full day of racing, riding, bantering, good vibes and just about everything in-between. Crazy to think, that the following day the entire state of NSW went into lockdown. We’re stoked to be able to pull off the banger event before shit hit the fan, what a way to go out!

Mother Nature turned on the sunshine coupled with a little tail wind for some extra speed. The course was the best yet! A leg burner, once out of the cattle gates, riders took on the bucking top section with tricky rollers, emulating the feeling of riding a bull out of the gate. If you managed to get through the bucks, it was straight into some large winding berms followed by a number of short and tight turns, which then opened back into some fast-flowing banks and berms. A great mix of features, allowing those with speed and board control to really give it some, or first timers to push their limits.

When riders weren’t racing they were posted up in the YETI viewing area, cheering other riders from the hay bales and chairs as they tried to master the bucking bull section of the course. The cooler provided all riders with their hydration of choice – Red Bull or Pirate Life and boy all competitors were thirsty! The course leaving riders huffing, puffing and shaking as they hit the finish line.

The Grom and Junior categories were first out of the gate for the day and we’ve never seen so many kids give the course such a red-hot crack! It was Willow Bakogiannis who took out the Grom Womens category and Sims Snowboards rider Juan George who took out the Grom Men with a strong time of 1:07:16.

The Junior category was stacked with the most riders the event has seen! The Junior Women slayed the course, the future is looking super-fast. Maya Billingham took out the top spot for the Junior Women with an incredible time of 1:05:83, followed by Alize Steggel in second and Taya-Lilli Dent in third spot.

The Junior Men was a strong field of competitors with Max Vardy banking a time of 1:02:03 smoking his competitors by 2 seconds. Rip Curl rider, Sunny Steele took out second place and Archie Borcherds landing on the podium in third place.

One of the more heated categories of the day was the Masters Men & Women who always put in on the line to try land a spot on the coveted banked slalom podium. In the Women’s category, it was Banked Slalom regular and Thredbo local Wiki Jones taking out the top spot, leading with 4 seconds between her and spot number two. Kellie Meehan was behind Wiki, taking out second place, closely followed by Aussie snowboard icon Sasha Ryzy in third place.

The Masters Men field was stacked with past podium riders, world record holders, snowboard relics, ex-pro’s and first timer competitors. Coming out on top was Ben Mates, who is a two-time Winter Olympic Halfpipe competitor. Ben took out top spot with a 1:01:25, followed by Banked Slalom Icon, Adrian Borcherds with a 1:03:94 and in third was Brad George with a 1:05:56.

Open Womens! WOW! Our biggest field of females to date…over 50 riders took on the course with speed, fury and fire. Winner of the Open Women’s was Olympic Halfpipe rider Emily Arthur, with a speedy time of 1:05:35, closely followed by Olympic Slopestyle rider Tess Coady with a 1:05:68 and boardercross rider Georgia Baff coming in hot and taking out third place with a 1:06:38. 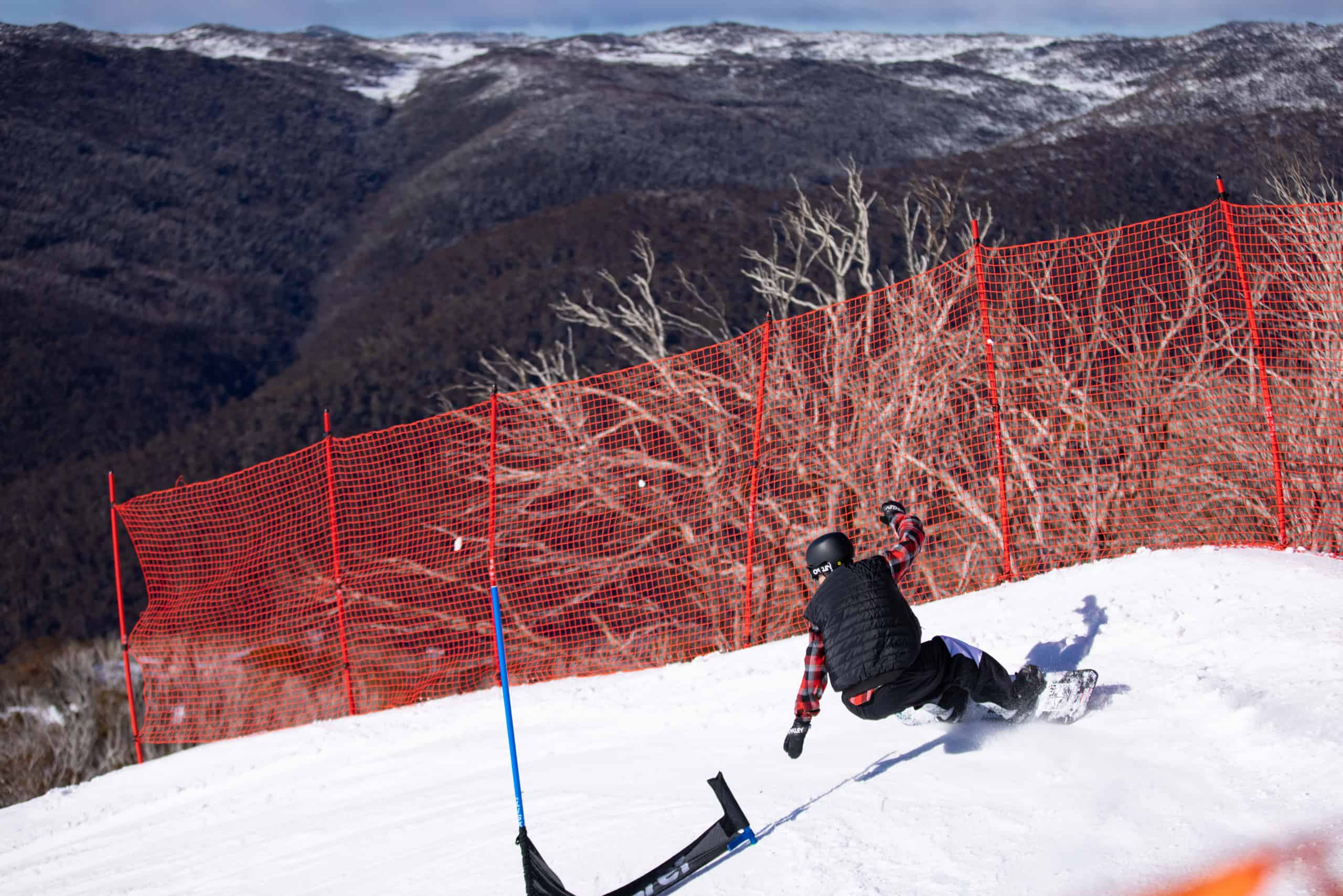 Open Men’s boasted just under 100 competitors! All riders looking strong on the top section, it was the riders who managed the bottom half of the course that mange to find themselves with the faster time and land on the podium. Like a bat out of hell, snowboard freak Valentino Guseli took out the top spot and fastest time of the day with a 57.58! Behind Valentino was boardercross rider and speed demon, Henry Baff with a 59.68. In third place was Aussie Slopestyle Olympic hopeful, Matty Cox with a 59.93.

To see all the results and timings from the event. Click here.

Both Valentino Guseli and Emily Arthur both won an entry into the 2022 Legendary Mt. Baker Banked Slalom for taking out the top male and female times of the day. How good

Awards were not only given to the fastest! The Sims Snowboards x Transfer Banked Slalom spirit award was for the taking…Going to the person who throughout the entire day – represented with true Banked Slalom spirit. The Butless Chaps competitor who took out a brand-new Sims ATV board for the best spirit. Plus Ric Guseli, father of Valentino took out the biggest buck of the day, winning a brand-new G-Shock Watch.

A huge thanks again to everyone who came up and competed! And lastly a huge shout out to all the sponsors for jumping on board and supporting – Pirate Life, Rip Curl, Sims Snowboards, G Shock, YETI, Red Bull, Mountain Collective and Thredbo.