Every self-respecting skibum has a big idea to make skiing in Australia better, so I thought I’d ask 5 people from different backgrounds for theirs. Here’s what they came up with. 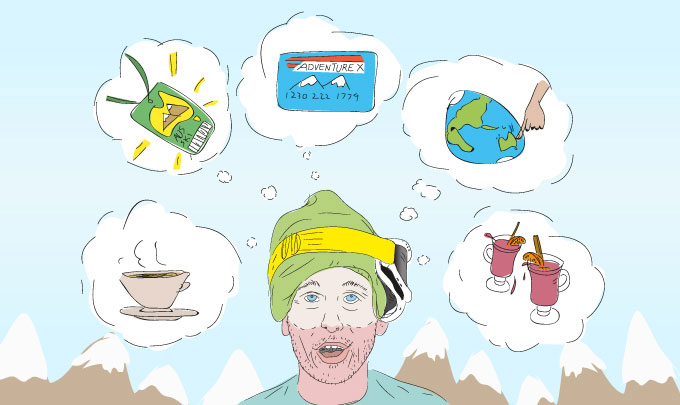 A hot chocolate and a long lunch is as sacred to skiing and snowboarding as first lifts on a powder day. It’s an immensely important part of the snow experience and it’s about time we stopped ignoring it.

Scrap the boring, big, barns like we see on the hill in Perisher and at the base of Thredbo. Bring small places back. Now more than ever Aussie ski resorts need to up their service game, not just to compete with overseas resorts, but to meet consumer tastes and expectations generally. It’s not the ‘90s anymore, and although the big barns can serve 500 roast beef rolls an hour, there’s nothing to say of the experience.

Great diverse food, cheaper prices, fantastic coffee and hot chocolates, fast service, seating on decks that are kept snow free, and maybe even an open fire place. But more than anything, they’re small, small, small! If they’re all owned by the one mob I don’t care, and that may be the only way they can make money, but the emphasis needs to be put on ambience, an experience that echoes the joy and uniqueness of being in an alpine environment.

Once we get this right, and our ski areas build a food culture to show off, we could even host a Snowy Mountains Food Festival to celebrate the unique vibe of a long lunch among the snow gums.

Steve is a manager of Cronulla lodge ski club. Him and his partner Alison run the lodge with a strong emphasis on food… and time off to go cross country skiing.

Entrench genuine skier value by providing more choice at a lower cost by rationalising ski area access in Australia. This would be achieved by ski area companies merging their operations and ownership, or through well crafted joint marketing and common mountain passes.

Also, the Australian ski industry increasingly competes internationally, and can meet that challenge by providing excellent home season snow sport value while also embracing strategic alliances and relationships with overseas snow sports destinations, and maybe even warm destination leisure areas, that would complement Australian’s domestic skiing experience. Imagine, for example, a yearly pass that gives you lift access to Perisher, Thredbo, Hotham, Coronet Peak, Mt Hutt, Niseko, Aspen, Heavenly and Whistler, but then also gets you in the door at Saphire Freycinet and Namotu Resort. I’d buy that.

Pie in the sky perhaps, but I reckon it’s worth a crack.

Ashley is the former CEO of Perisher, he once shook Kerry Packer’s hand and now is a South Coast recluse.

3. Hayden Bray – A credit card with a difference

I dream of an AMEX that doesn’t penalise you, but rewards you – an ADVENTUREX. Swipe your ADVENTUREX and earn points towards extra baggage on flights, travel specials with participating tour operators and, best of all, you can earn ‘Skier Miles’.

Calculated by the number of lifts you ride per year (which is possible now we’re all on digital passes), ‘Skier Miles’ earn points towards your next season pass – the more you ski, the greater the discount on your next pass. If you earn over a certain ‘Skier Mile’ threshold, the resort starts to pay you for the extra miles. This is couched in the idea that the more time you spend skiing in a ski resort, the more money you inevitably end up spending at the resort. I find the concept of being paid to ski almost irresistible. ADVENTUREX is set up to reward you and your roguish, money-burning, ski bum behaviour.

ADVENTUREX members can also access the global ADVENTUREX community and connect online to share stats, trip tips, and experiences. Imagine that, a global community of ski bums linked by a single rewards program.

ADVENTUREX – because living should make you richer, not poorer.

Hayden played for the Sydney Swans before spending the next 30 years as an advertising strategy architect. He sold his ad agency, Bray Media, in the early ’00s and now is a born again skibum. These days Hayden spends his time trying to keep up in the back country with Steve Lee.

If the Australian continent moved 15 degrees of latitude south all our problems would be solved. Sure, Melbourne’s winters would be dark and miserable, the summers wouldn’t be much to look forward to either, Icebergs might cause trouble with the Sydney to Hobart and our agricultural industry would shrivel. But, imagine the snow. Australia’s snow line might be as low as 300m. We’d be skiing the Otway ranges in the morning and surfing Bells Beach in our dry suits that same day. People in Canberra could ski after work, under lights of course, because it’d be dark well before you left the office. Sydney-siders could ski tour out of Katoomba and host big mountain events at Barrington Tops at the weekend. And then there’s the real mountains, the ones we ski today. They’d have glaciers gushing from their peaks and Buller would have 1500m of steep vertical – some real leg burners.

Watkin is a nationally recognised and highly successful ski bum… I mean, pro.

5. DJ EDDY – Not sure what this one’s about, but I’m sure there’s an idea in there somewhere

More Gluwein! Hot wine with cloves n Cinnamon n Orange zestys, this is a radical departure from quaff’n sharp reds n halfbaked ports. The fumes from this hot sauce go up your nose before the juice hits your lips. So this Aussie winter already has some reference to Gluwein, I can smell winter and the fumes are makin’ my legs feel bendy and i keep havin’ spas and wearin’ my ski boots around the house and dropin’ small airs off the bar stools. If you fruitcakes are also doing this my belief is we can massage a solid winter season from the actions we get up to right now. These type’s of activities which I consider to be foreplay are i reckon layin’ the sleepers to make sure we don’t end up throwing rocks and frozen mud at each other in a dirty game to replace skiing. To ski and to prepare to ski are not a sport but an art, the more time we spend gettin’ loose in the spa will mean the higher airs we pull in the bumps, the more Jagertea we drink the better mind-skis and radical lines we will pull as the snow starts to engulf us and our dream weaver pow floatation comes to life. I know that what I’ve been doin in these pre snow weeks are a true pre-season rubdown to bring the storms and get our face peppered by snow n hail n’ weather very soon. So take my hand and walk into the gallery as we make art together this winter.

DJ EDDY is some guy we found on the internet. We regret asking him for his big idea.

And my Idea? Buy Charlotte Pass.