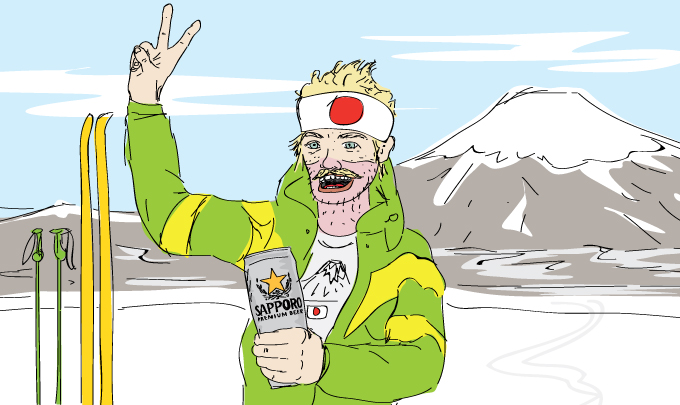 The Aussie in Japan. Illustration by Russell Smith

Like many of us, I’m hooked on Japan. I’ve been a couple of times now, first starting up in Niseko, then exploring the bigger resorts on the main island of Honshu as I figured out the lay of the land. My last few trips to Japan have been entirely spent in Hakuba and I’d say the next few will be too. But despite my love for Japan and everything Japanese, I’m slow to absorb the many complex ins-and-outs of Japanese etiquette. It’s a world of nuance, tradition and subtlety that often leaves us Aussies feeling a little beguiled. But I’m making progress. So I’ve compiled my ten-point etiquette checklist to help you out on your next pow-cation.

1. Bathing is an important part of the daily routine in Japan. Onsens are for relaxing, and the body must be cleaned and scrubbed before entering the water. If you’ve forgotten to bring your boardies, don’t worry, the Japanese are cool if you just go in naked. And if you are keen on a bomb into the onsen, make sure you check the depth of the water first.

2. Mealtime is the cornerstone of daily life in Japan and the Japanese take it very seriously. Always order the eel.

3. Why pay 4000 yen for a shot of Sake when you can get a bottle of Smirnoff at Lawson for the same price?

4. Bowing is considered extremely important in Japan. Bows can be informal, formal, and very formal, depending on the situation. If it looks like you might have to get into a bit of a biff, make sure you bow beforehand. An informal bow will do, but the Japanese believe it to be impolite if you do not do this. There have been problems Niseko with people not bowing before they punch-on outside of pubs. As a result, the local community have had to take steps to ensure that it people are doing it.

6. Closed signs are just for the locals, that’s why they are in Japanese.

7. Greetings are considered to be of extreme importance in Japanese culture, and are often delivered with energy and vigor. A lazy greeting is regarded with the type of disdain that would accompany a limp handshake in Australia. The most common greeting in the morning is ohayo gozaimasu, which basically translates to “How’s it gaarrrn, legend!” If you are nervous about using the Japanese version just stick to the English one.

8. It is considered an honour to be invited to someone’s home in Japan. If a local invites you round to their joint make sure you bring some tins. Anything less than a sixer is considered an affront to their hospitality. No longies, but.

9. Pointing your finger in someone’s general direction is considered rude in Japan. A shaka on the other hand is always well received, especially when paired with a “How’s it gaarrrn, legend!” While a single shaka is acceptable for young people, ensure you give at least a double to the elderly.

Boothy’s blog is supported by: