Analog is proud to announce Adam Morretti from NSW as the winner of Analog’s inaugural Australian ‘Design Unlikely Features’ contest. Moretti’s winning feature, the ‘Fuller Karl’ was selected as the winning park feature design, beating over 100 other custom designs.

The winning feature, the ‘Fuller Karl’ designed by Adam Moretti. How fun is this thing going to be?

The idea behind the ‘Design Unlikely Features’ contest was to submit designs for unique, imaginative and easy to move park features. Designs were judged on three criteria: creativity, ride-ability, and build-ability.

The judging team, including Dave Downing from Analog US, the Perisher Park Crew and the Editors of Transfer Snowboard Magazine had their work cut out for them. “The judges were really impressed with the calibre of entries; all the entrants really out-did themselves and produced a tonne of impressive designs that were creative, unique and above all, fun to ride”, said Analog Marketing Manager, Katrina McGarry.

The ‘Fuller Karl’ (named after a friend of Moretti’s) received the highest collective scores on creativity, ride-ability and build-ability. In taking out the contest Adam has scored the bragging rights that come with having his own park feature and walks away with a round trip to Perisher for himself and afriend, 2 x two day lift passes and a full set of Analog outerwear and apparel.

The unveiling of the winning feature will be held on August 4th in conjunction with the ‘Design Unlikely Features’ Jam event at Perisher. Local riders will compete on the feature for a share of $2000 worth of cash and prizes. 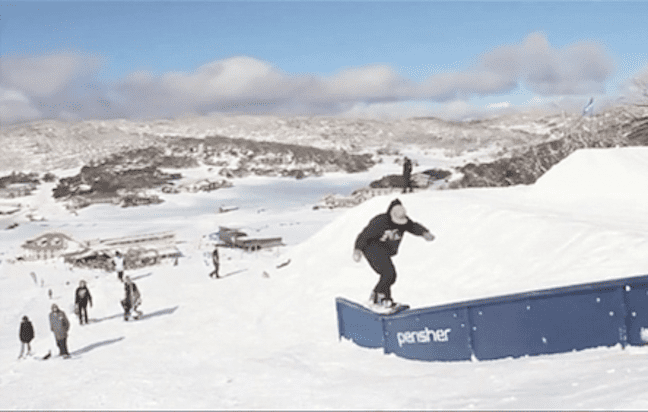 Analog Team Rider, Daniel ‘Harry’ Crean, will be one to watch at the ‘Design Unlikely Features’ Jam event at Perisher. Back one, switch 50-50, switch back one out in 2011. Photo Lucas Wilkinson.

More information on how to register for the Design Unlikely Features event will be announced soon.