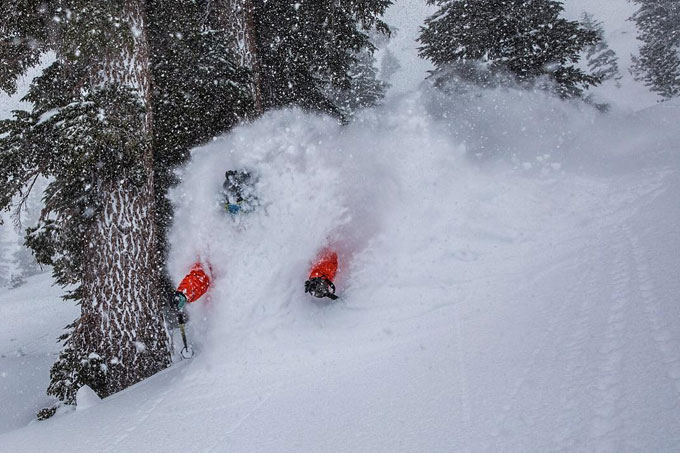 The snow kept getting deeper each day. Bernie Rosow on a day he described as “nothing short of epic”. Photo Christian Pondella

After a slow winter with relatively weak and isolated storms, things finally kicked into gear last week in California, with a big storm dropping 1-2.5 metres of snow across the Eastern Sierras. Mammoth Mountain was at its best, locals and visitors enjoying some long-awaited deep powder turns.

Fortunately, the few snow-bearing storms that hit Mammoth during the first half of the season had built a decent base and when I was there in early February, most of Mammoth’s terrain was open. The groomers were perfect, the parks were in great shape, but while there was some fun skiing off piste, it definitely needed a good top up.

Things started to turn in late February with a quick storm dropping 10-15cms of dry snow on Feb 20 before a bigger storm came through with the goods on Feb 22/23, leaving 35cms of super dry, quality snow across the mountain. 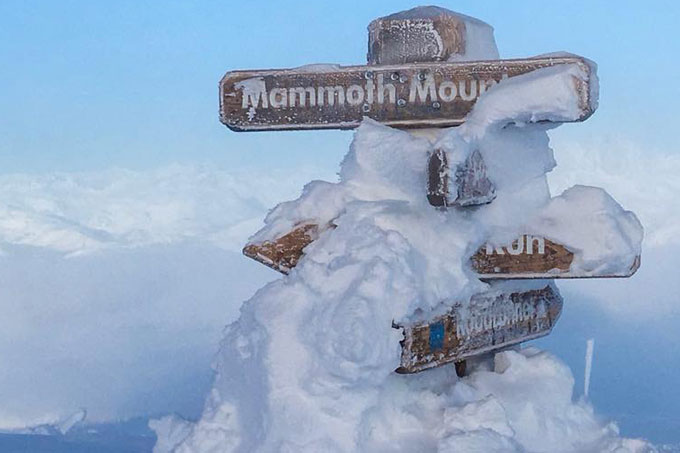 The sign at the top of Mammoth. Just a week earlier, this sign was three metres out of the snow.

These storms were a taste of things to come as the forecasts were indicating a strong storm building in the NW Pacific and heading for the US west coast. By the time it crossed the coast, the system had picked up a lot of moisture, and confidence was high that the biggest storm of the season was finally going to bring some significant snow.

The first front hit on Feb 27, dropping 25-40cms over a 48-hour period before the second wave hit on March 1-2. That storm brought strong winds and heavy snowfalls with 60cms at the base and over a metre up high, the result being some great powder. 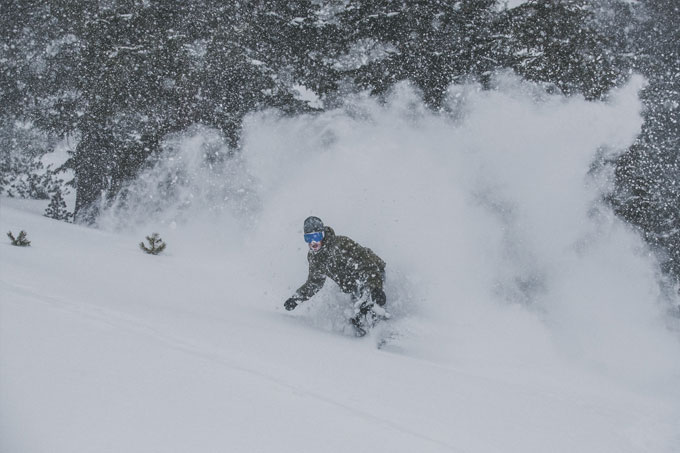 How good does this look? Early powder turns on March 2 after 25cms overnight. Photo Pete Morning

The days leading into the weekend were really, really good, Mammoth local Bernie Rosow describing March 1 “as good as it gets”. However, the storm was just kicking to gear and by the time it stopped snowing on March 4, Bernie described the conditions as “nothing short of epic”.

The storm totals climbed each day and by the time the last snowfalls cleared in the early hours of March 4, the totals were 1.2 metres at the base and a massive 2.2 metres on the upper mountain over a five-day period.

Not surprisingly the weekend of March 3-4, attracted the biggest crowds of the season. The top of the mountain was wind loaded to the max and ski patrol had its work cut out for it, with a pre-dawn start and a lot of avalanche control. On the Saturday morning ski patrol were doing routine avalanche work when a large avalanche released on the Climax ski run, a double black run off the top of the Panorama Gondola. 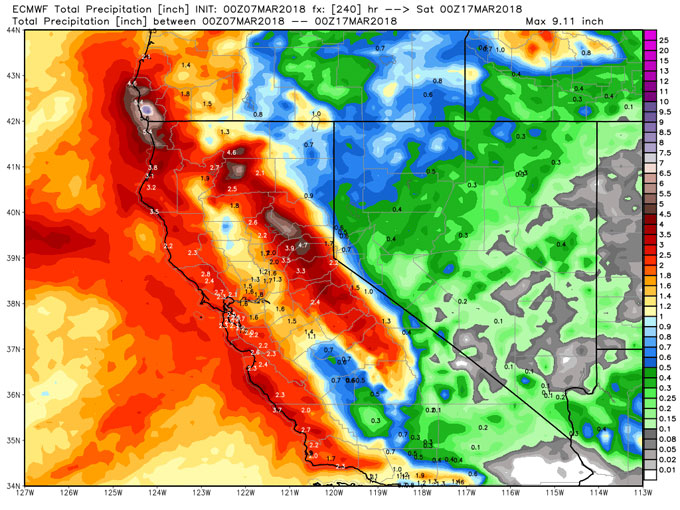 The forecast looks good for more snow around March 16/17

Mammoth Mountain released the following details: “The avalanche traveled down Upper Dry Creek and terminated at the bottom lift terminal of High Five Express [Chair 5]. The powder cloud from the avalanche extended about 100 meters into an area open to the public, where two guests were partially caught. Both were able to immediately free themselves without serious injury. Additionally, six employees working at the bottom of the closed lift were partially caught, but freed themselves quickly, suffering only minor injuries.” 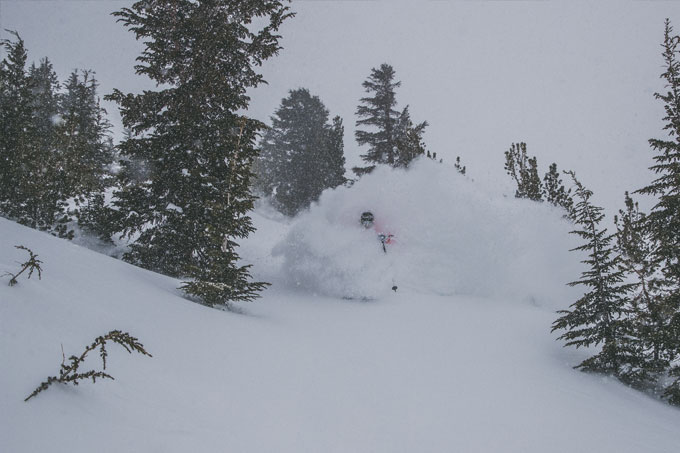 Ski patrol and emergency responders were quick to the scene and searched the area over a six-hour period. Fortunately, there were no serious injuries and all staff and guests were accounted for. However, the resort closed for the day, resuming normal operation on March 4, which turned out to be a blue bird day with fresh snow, but big crowds.

Squaw Valley also had an inbounds avalanche on the afternoon of Friday March 2, with one man suffering a broken leg. Both slides are reminder of what can happen when a resort gets a lot of snow in a short period of time. 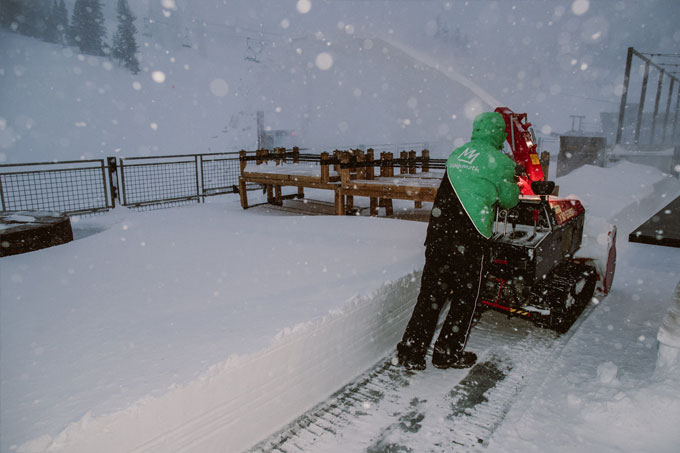 This week it has been sunshine and fun skiing in Mammoth and the forecast is for a few snow showers this weekend. However, it looks like things will change for the better next week, forecast models currently pointing to another storm which could drop a decent amount of snow over a two-day period. It looks like it’ll hit around Friday March 16, setting things up for a good third week of March.

The mid-mountain base at Mammoth now sits at 2.6 metres and it is 3.3 metres at the top, pretty healthy, but still below average. After the slow first half of the winter, people were talking about a “Miracle March”. Whether that happens depends on much snow Mammoth gets from next week’s storm. 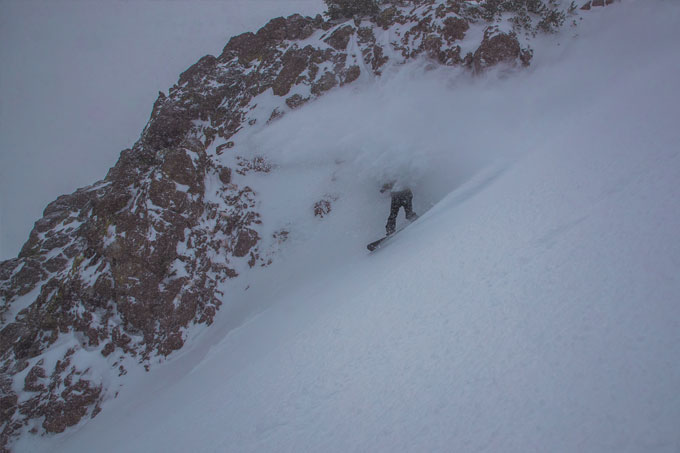 March 1 and the biggest storm is just kicking in. Photo Peter Morning

Fingers crossed, but at this stage the cover has improved significantly, and after this next storm it looks like Mammoth is heading into another fun spring.