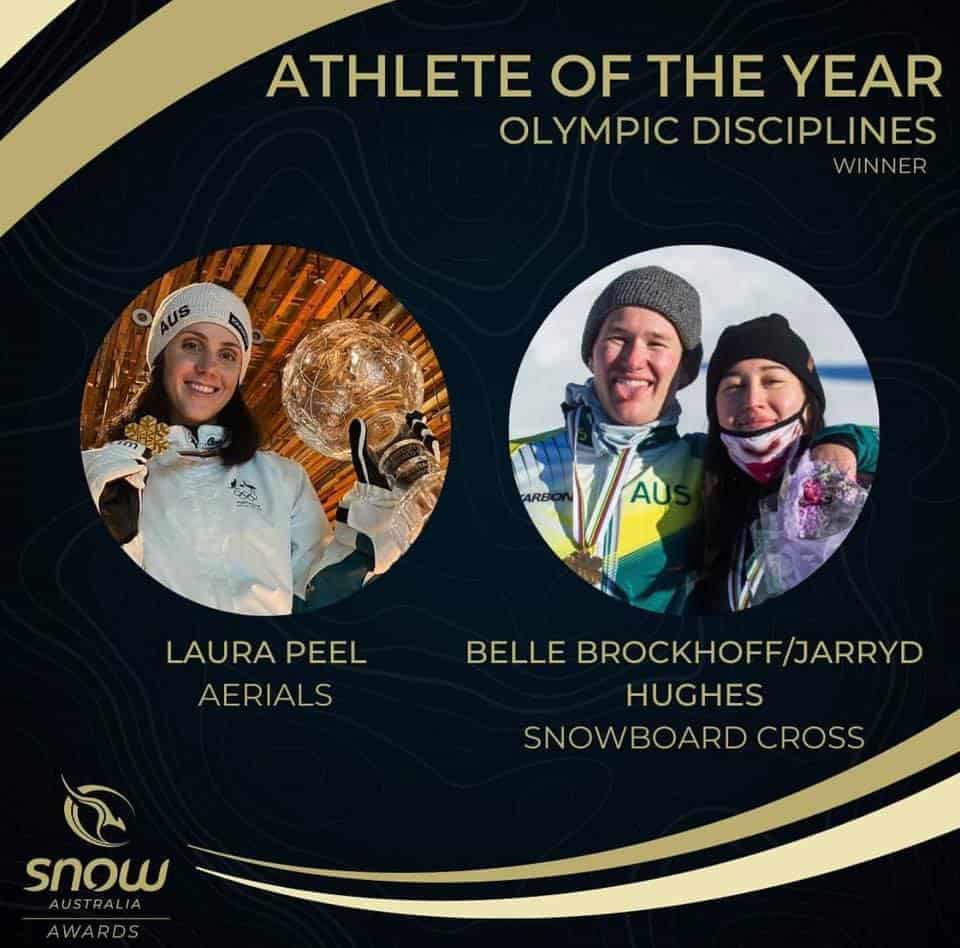 Melbourne, April 30: Australia’s snowsport community gathered at the Snow Australia Awards in Melbourne last night to celebrate the remarkable performances produced by Australian athletes and coaches over the last 12 months.

Ben Tudhope was recognised with the Athlete of the Year award for Paralympic Disciplines, the second consecutive award for the Para Snowboarder who was the winner in 2020.

Tudhope said it was amazing just to be able to travel and compete this season, given the many logistical challenges posed by the pandemic.

“Even to compete at just one event has been amazing,” he said. “Now I am looking forward to next season. We have a big year ahead of us with the World Championships in January and the Paralympic Winter Games in March. They are two major competitions back to back so I am very excited about it.”

Laura Peel, who in March became Australia’s first ever aerial skier to win two World Championship gold medals (2015 and 2021), was over the moon capping her best season to date with a back-to-back and third overall Snow Australia Athlete of the Year (Olympic disciplines) award.

I am very honoured to be Athlete of the Year,” said Peel after receiving her award from Senator Richard Colbeck. “There are obviously some incredible athletes in our little Australian winter community and I wish Jarryd [Hughes] and Belle [Brockhoff] could be with us tonight.

“There are a lot of people that have helped me to get to this point at my career so I’d like to start by thanking the Olympic Winter Institute of Sport, Snow Australia, the Victorian Institute of Sport, the Australian Federal Government and our sponsors Karbon and XTM.

“I’d also like to say thank you to my amazing coaches and teammates. Finally, I’d like to thank my incredible family and friends, who have always supported me along the way. Thank you everyone.”

Belle Brockhoff and Jarryd Hughes also made history when they won the first ever Snowboard Cross team event at the 2021 Snowboard World Championships. The duo are now looking forward to competing together again at Beijing 2022, where the discipline will make its Olympic debut in less than 10 months.

Snow Australia announced that its traditional Outstanding Achievement Award had been renamed the Alex ‘Chumpy’ Pullin Outstanding Achievement Award, to honour the memory of the two-time Snowboard Cross World Champion who tragically passed away in July last year. The award was presented to aerial skier Dani Scott for her amazing comeback season, after spending three years away from the snow due to injuries.

“I am so honoured,” Scott said. “This means the world to me because he [Chumpy] has always been there for me. I thought a lot about him when I was out there [sidelined by injury]. Just seeing how hard he worked and what he was able to achieve was inspiring and it will live on forever.

“It’s really an exciting time to be part of such a successful aerials team and to see the young athletes come through is great. We’ve got such a rich history and it keeps going on,” she said.

16-year-old Snowboard Halfpipe talent Valentino Guseli was recognised as Junior Athlete of the Year. The young and upcoming athlete is currently based overseas, but he sent a video message to thank the snowsport community for the award.

The Snow Australia Awards night was also an opportunity to present the first Snow Australia Medals – a legacy project launched by Snow Australia in 2020 to recognise the achievements and careers of those past and retiring athletes who represented Australia at the highest level of snowsport competition.

It was an extraordinary season for Flying Kangaroos’ Laura Peel, who was the jewel in the crown of an aerials team that continues to shine on the world stage.

After last year’s Crystal Globe, the dual Olympian continued her run of success, becoming Australia’s first ever aerial skier to win two World Championship gold medals, after having won her first title in Kreischberg, Austria, in 2015.

Laura’s World Championships victory capped off a successful World Cup season where she won gold in Finland and Russia, along with two other podiums – a series of results that secured her second consecutive World Cup Crystal Globe.

Belle Brockhoff and Jarryd Hughes teamed up to deliver a standout moment at the 2021 Snowboard World Championships.

The pair created history, taking out gold in the first ever Snowboard Cross teams event at a World Championships. The event will debut on the Olympic program in Beijing 2022.

Ben Tudhope continued to impress on the world stage in the men’s para snowboard.

After much of the Para Snowsport World Cup season was cancelled due to COVID-19, Ben was thrilled to travel overseas to get some competition under his belt in the build up to Beijing 2022.

Ben walked away with a gold and silver in the only World Cup of the season, continuing on from his winning run in the 2019/20 season, when he claimed his first Crystal Globe.

Dani Scott made an incredible return to aerial skiing after almost 3 years away from competition, having taken time out after Pyeongchang and undergone ACL surgery after a training injury on her initial return.

Despite a limited preparation, Dani won gold in her first World Cup event since the 2018 Winter Olympic Games. Making the comeback season even more remarkable was the fact that Dani jumped triples on snow for the first time in her career.

16-year-old Valentino Guseli put the best athletes in the world on notice when he qualified for finals in first place at his World Cup debut in Switzerland.

He finished 8th in the event, making an instant impression on the world tour and drawing comparisons to greats such as Shaun White and fellow Aussie Scotty James at a similar age.

Valentino also set an official Guinness world record for the highest halfpipe air ever measured, beating Shaun White’s for the honor when he recorded a mind-blowing 7.3 metres (24 feet) in Laax (Switzerland)

As coaches of an Australian aerial skiing team that continues to dominate on the World Stage, Misch and Dave guided Laura Peel to her second consecutive World Cup Crystal Globe and second World Championship gold medal – the first Australian woman ever to do so.

The pair were also instrumental in Olympian Dani Scott’s return to sport, after an extended period on the sidelines with a knee injury. She made a spectacular return, winning gold in her first event back.

In just his second season at the helm of the Para Snowsport Austraiian team, Par was able to guide Ben Tudhope to more success as the 21-year old Para Snowboard athlete was able to win a medal in both the events he participated in.