The Board of Ski and Snowboard Australia (SSA) resolved earlier in the year to change the name of the organisation. As of Friday, November 8, SSA will be known as Snow Australia.

Snow Australia President Dean Gosper said: “The change to Snow Australia coincides with the recent unification of the sport and reflects its responsibilities and connections in simple and elegant language.  It embodies the organisation’s truly unified, national vision and the sport’s intimate connection with its terrain.”

Snow Australia CEO Michael Kennedy commented: “Ultimately, the continued success of Snow Australia supporting athletes and developing champions will underpin recognition. The tag line “Athletes. Pathways. Performance” is embedded in the new brand as these are the pillars on which our sport is built.”

Displayed below, is the new logo that will accompany the change to Snow Australia, carrying forward the heritage of the universally recognised “Skiing Kangaroo.” 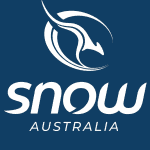 The snow sport community came together on Thursday night to honour young athletes, volunteers, clubs, schools and development coaches from around the country at the inaugural Snow Australia Community Sport Awards, held at QT Canberra.

Designed to recognise athletes, coaches, volunteers, clubs, schools, resorts, administrators and programs at the development and pathway level of snow sports, the Awards also importantly recognised the significant service of those who continue to give back to the sport.

Snow Australia CEO Michael Kennedy said that the quality of all award recipients on the night was a true testament to the growing snow sports community.

“Tonight we celebrated those across the Australian Snow sport community who give so much at a grassroots level to make our sport one of the most popular in Australia,” Kennedy said.

“We not only had the opportunity to celebrate great emerging talent, but also recognise the significant contribution of clubs, coaches and officials.

“Last year our organisation made the significant step to unify and now under our new brand of Snow Australia, we want to truly connect to more people through our sport.  Our snow sport community is made up of passionate individuals and clubs who are at the forefront of our work in the pathway and tonight was our opportunity to say thank you to them,” he said.

There were plenty of awards recognised throughout the evening, with recipients including Leslie Ludwig who took out the prestigious Service to Snowsport award, for her extensive contribution over more than 40 years.

The Thredbo Ski Racing Club was awarded Club of the Year, for their commitment to encouraging and supporting participation in Snowsports and their work done to align themselves with the recommendations from the Snow Australia Alpine review.

Hamish Cox was also among the night’s winners, taking home the Club Coach of the Year.

Jack Adams won the Young Achiever of the Year, recognised for his contribution back to the Alpine community along with balancing his university studies while competing overseas for six months of the year.

Other noteworthy awards included the Pathway Initiative Award, presented to NSW Freestyle Talent Identification Program and Official of the Year which was awarded to Freestyle judge Paul Livissianos.

Further information not the awards and the winners can be found here.