It looks as though spring has come a little early in Japan this year as the prevailing NW winds we see during winter appear to be faltering. The snow falling this morning may be the best you’ll see in the coming ten or so days. This week will see Honshu dominated by high pressure, while westerly winds over Hokkaido will just bring the odd light snowfall there. There’ll be a short interlude on Saturday when a low from the East China Sea swings past on the Pacific Side of Japan and gives central Honshu a dusting, possibly followed by another more foreboding low next Thursday and Friday. So switch into spring mode and go enjoy cutting some shapes in the sun. 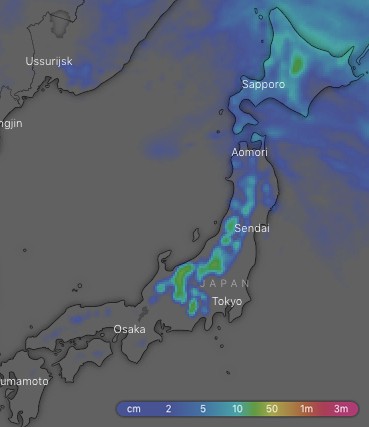 Some decent snow showers on Honshu during the morning, but will ease to flurries as strong NW winds ease. Remaining snowfalls will clear Hokkaido in the morning as westerly winds pick up.

There’s sunshine to be had as a high passes over central Honshu where there’ll be light winds, but westerlies further north. Later in the day a low moves out of the East China Sea and approaches Japan from the southwest… dum, dum, dum, dummm!

The low will bring rain to the Pacific side of central Honshu during the morning with snow above 1200m or so. Fortunately temps are a remain chilly enough on the Sea of Japan side of central Honshu that a dusting of snow will fall to bottom chair lifts with snow showers thereafter. Meanwhile, a light northerly breeze will bring the odd flurry to Hokkaido in the morning.

A ridge builds over the southern half of Honshuwith mostly clear skies and light winds there. Plenty of sunshine further north too, but W-SW winds will strengthen to gale force.

The ridge will weaken over the southern half of Honshu allowing cloud to move in later in the day as temperatures become positively balmy, and there may be a spot of drizzle in the evening – just a spot though! There’ll be snow flurries further north during the second half of the day as a weak cold front hits, dropping temps nice and low.

The ridge builds again over Honshu with a mix of cloud and sunshine. It’ll be a similar story for Hokkaido, with W-NW winds thrown into the mix and the odd snow flurry if you’re lucky.

High pressure continues to dominate Honshu with more sunshine on the menu. W-NW winds over northern Honshu and Hokkaido may push in snow flurries during the early hours.

We may see another low pop out of the East China Sea next Thursday and bring warm temps and a deluge of rain to central and southern Honshu from late in the day into Friday. From then on, it’s spring! Spring will bring with it the usual passage of highs and lows where you can have sun, rain and snow in a single day. There is a Godzilla sized snowpack to chew through, plus you might get lucky and score a powder day.