All Signs Pointing To A Classic Neutral Pattern, Which Turns Out To Be A Good Thing

Brace yourself folks, snow is on the way, and sooner than you may think. In fact, it’s arriving as we speak, Thursday the 10th of May! Yes folks, wait no longer. For the next three days, Thursday to Saturday, we’ll be seeing snowflakes falling from the sky.

A cold front crosses the Australian Alps Thursday morning, and then a low spins up just east of Tasmania. The low hangs around during Friday, then slowly meanders off later on Saturday. This is a significant event with snowfalls totaling 25-35cm at most resorts, with 45cm possible at the highest peaks. Snow should slowly lower to about 800m by the end of Thursday as the coldest air makes landfall. The heaviest falls are expected Friday evening and the early hours of Saturday morning. During this time however, warm air creeps in, lifting freezing levels to about 2000m, so the snow on lower slopes will start looking rather wet if not outright rain. The snow peters out Saturday afternoon, leaving a winter wonderland in its wake. 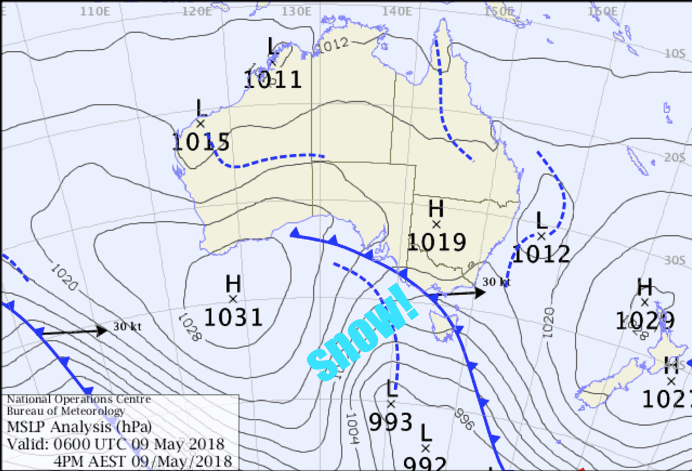 A sight for sore eyes. The BOM’s analysis drawn on Wednesday afternoon showing snow is on its way. Snow will fall Thursday to Saturday with some serious stacks piling up. Source:: BOM

So what are we going to call this storm, then? Snowmageddon? I’ve heard that one before. Blizzaroo? Meh. Magic-May? Maybe. Ten points to the person who comes up with a good one.

Whatever we’re calling it, it’s great and it’s exciting. But remember there’s a whole season ahead of us, so I’ve been busy trying to figure out whether we will see more attractive charts like this one. If you haven’t already read my first Australian snow season outlook, you can read it here.

The first thing to know is that the El Niño Southern Oscillation (ENSO) is still coasting along in neutral. Sea surface temperatures (SST) remain a little chilly in the eastern Pacific, but should continue warming throughout the season. Climate models suggest El Niño status may be reached mid to late spring. If El Niño status is reached, it’s likely to be a weak one and its influence on Australian snowfall will be small.

Luckily, a neutral ENSO should hold the balance of power this season. As I explained in my previous outlook, neutral years are awesome. These years see anomalous low pressure lounging all over the Australian Alps, ushering in snow-bearing storms. Remember 1981? That was a neutral year and we had the deepest snow depth on record (361cm). There would have been a few happy mustachioed and mulleted gentlemen back then; no doubt there were a few blokes sporting both hair attires – mustullets. Let’s not talk about the following year though – 1982, an El Niño year – where we only had 91cm of snow… lets not even go there!

We can’t however, turn a blind eye to the possibility of a bit of El Niño flavour being thrown in at the end of the season because this is when the ENSO typically exerts it’s most influence on Australian Snowfall. During El Niño years, September sees snow depths 28% lower on average; early October sees 34% lower. But as I alluded to earlier, if El Niño does rear its ugly head, it’s likely to be too little too late.

The Indian Ocean Dipole (IOD) is also still taking it easy in neutral. There is a significant chance that we will see a negative IOD event this winter, with climate models run by the Bureau of Meteorology (BOM) and the United Kingdom Met Office (UKMO) giving us the nod during July. The highly regarded UKMO keeps the IOD negative all the way through September. This offers us a glimmer of hope as negative IOD’s help to bolster snowfall. It’s worth noting that negative IOD’s and El Nino’s very rarely occur in conjunction.

The Southern Annular Mode (SAM) switched into positive mode at the start of May, indicating storm systems and cold Antarctic air was tucked up closer to the South Pole. This big boy of the Southern Hemisphere is picked to swing negative within the next few days or week, putting the Australian Alps in the firing line of all that snowy goodness during the preseason. This is perhaps reflective of the whopping storm we’re about to receive over the next three days, and puts us in good stead for opening day. However, we don’t want to peak too early as I’ve seen a lot of years that start well, end up running out of steam and finishing below average.

Warm SST in the Tasman Sea should subside during the winter months and may reach normal temperatures for spring. An exception of this is the warmer waters around the east coast of Aussie, caused by the East Australian Current extending further south. Large parts of the Southern Ocean should remain warm throughout the season. However, SST in the Great Australian Bight could dip below average during July. 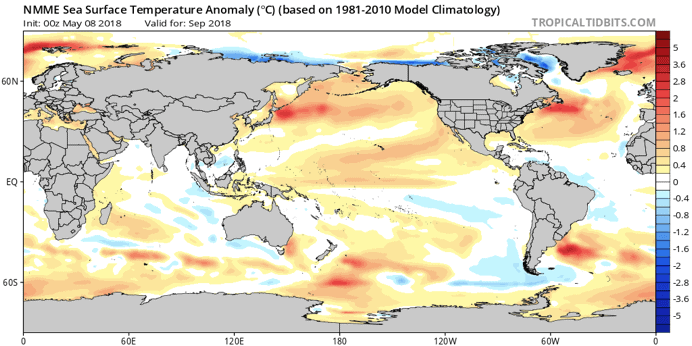 North American Multi-Model Ensemble (NMME) forecast for SST anomalies during September. SST should reach near normal in the Tasman Sea with the exception of an area influenced by the East Australian Current. Parts of the Southern Ocean should remain warm, but waters could be a little chilly in the Great Australian Bight from July onwards. Source:: tropicaltidbits.com

Climate models are in good agreement that we’re heading for a classic neutral ENSO pattern this season, especially during the first half. That means anomalous low pressure over southeast Australia extending into the Tasman Sea. That’s great news, as we’re more likely to see storms similar to the one we will have over the next three days. This pattern appears to weaken during the second half of the season, with some models even suggesting high pressure throughout the roaring forties during August and September. This is grasping at straws, but it would fit the idea of a neutral season tipping towards a weak El Niño towards the tail end. 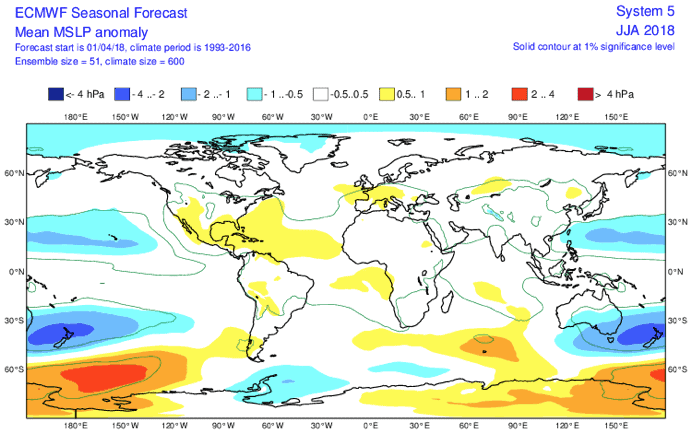 ECMWF mean sea level pressure anomalies for the winter months. The overall trend shows we are heading for a classic neutral ENSO, so we should see plenty of snow baring storms cross the Aussie Alps, as well as more southerly winds and a stormy Tasman Sea. Source:: ECMWF

Precipitation and temperature anomalies aren’t giving too much away. So I’ve been squinting at rather benign charts of Australia, trying come up with a clear answer to how this season will pan out. But as you would expect with neutral climate drivers, there’s no real push in one direction. The only trend I could muster up was that precipitation anomalies hint at a slight drying off during August and September. After a warm May, temperature anomalies over the Australian Alps quickly fade away. Chances are, these variables will occupy the middle ground, that being within the 25-75 percentiles, rather than lying at an extreme end.

Climate drivers and models are still indicating we are heading for a classic neutral ENSO pattern this season. That means we’re more likely to see snowstorms of a similar ilk to the one we’re about to get hit with, as well as more southerly winds. El Niño is threatening to show it’s ugly face late in the piece, but it should be too little too late to have any real effect. There is however, a real chance the IOD could swing negative for a time this season to give snowfalls a boost.

Basically, not much has changed since my last outlook, so I’m only going to slightly tweak my previous predictions. I foresee that the first half of the season will be good, but then we’ll have a slight slowdown during spring. Maximum snow depths should lie within a range of 185-225 cm when comparing to a long-term average of 195 cm at Spencer’s Creek. Snow machines will be held back during the preseason due to warm temperatures anomalies. These anomalies look to settle down once the season kicks off, so the snow machines should be able to let loose from then on.

Hopefully I have shed some light on the coming season and at least rattled your dags into thinking about it. I’ll update this outlook at the beginning of June as the excitement reaches fever pitch. If you’ve got a different theory on what’s going to happen this winter, or just want to provide feedback, then please hit me up on the discussion below. Or you can follow me on Facebook.

Now get out there and enjoy the snow! 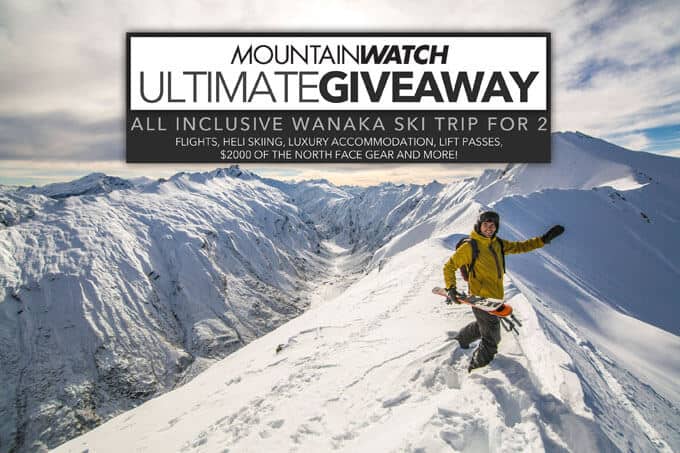