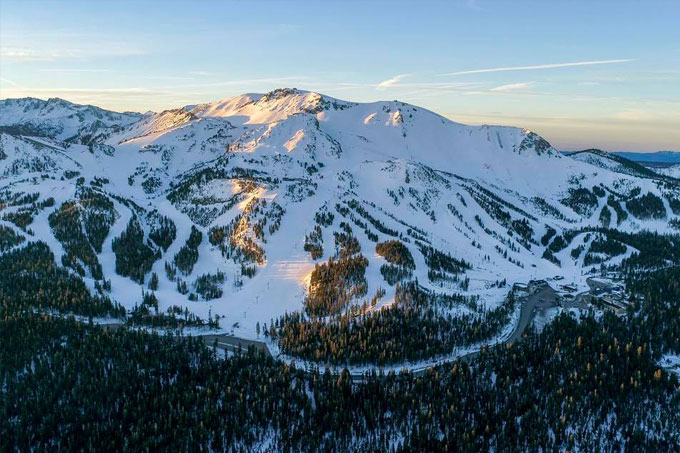 It may be a below average snow year, but Mammoth Mountain is living up to its reputation. Photo Feb 5, 2018.

Mountainwatch | Reggae Elliss
The drive down from Tahoe to Mammoth Mountain is spectacular. Through the wide expanses of the Carson Valley, the mountains rising dramatically to the west followed by a winding drive up into the Sierra foothills before a coffee stop at Bridgeport.

Not long after, the road sweeps around a corner and the spectacular view of Mono Lake is right in front of you. On a clear, calm day, the reflection of the mountains on the water adds to the spectacle. 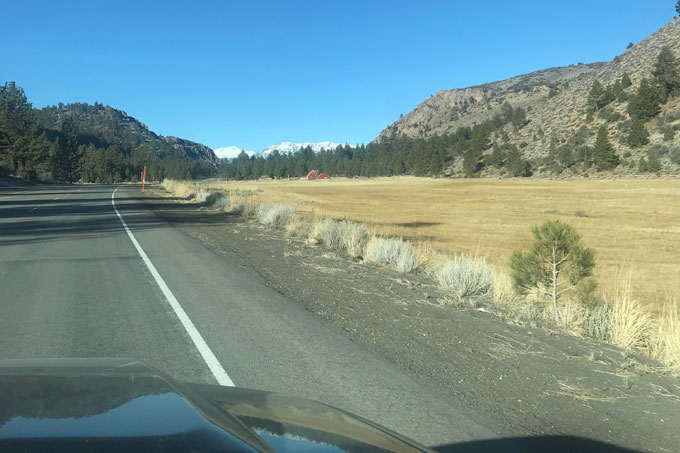 As we drive into Mammoth Lakes, the thing that strikes me is the size of the mountain and the grandeur of the Eastern Sierras. Despite the low snow year, the mountain is looking pretty good.

This is our third visit to Mammoth in four years, my family and I drawn back by the huge variety you find in 3500 acres of skiable terrain – the steep and fun off piste runs, long cruisy groomers and Mammoth’s famous terrain parks. It is easy to see why Mammoth has long been a popular destination for Australian skiers and snowboarders. 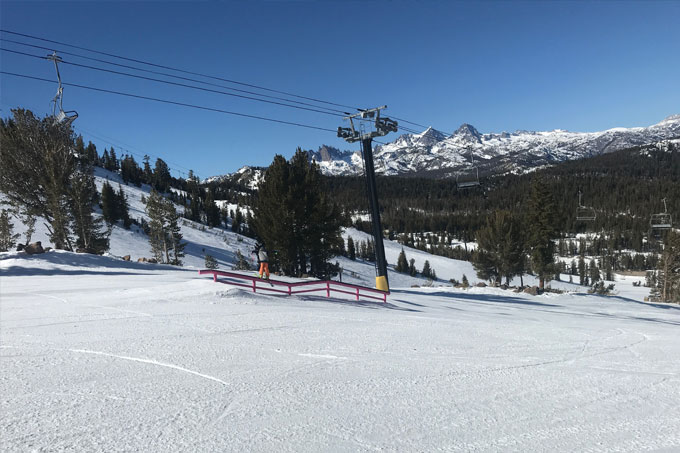 Joey Elliss, on rail in the Mammoth’s Main park

Whether you are a core rider or on a family holiday, you’ll have a great time. My kids love the place.

While snowfalls this season are well below average and nowhere near the record season Mammoth enjoyed in 2016/17, the cover at the moment is pretty good. Mammoth is not only big, but also very high with a base elevation of 3935ft (2424m) and a peak elevation of 11,053ft (3369m). This means it not only receives more snow than other Californian resorts, but it is colder and holds the snow for longer. 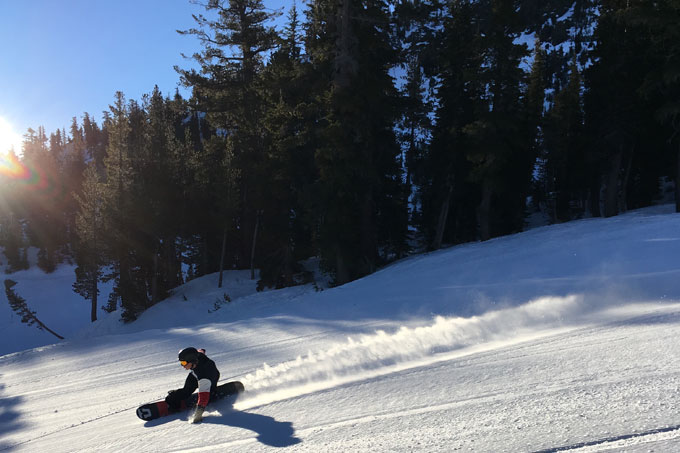 Carving the corduroy is a great way to start the day. Photo Mammoth.

This season Mammoth has had a cumulative snow fall of 394cms above 10,000 feet and has an average mid-mountain base of 130cms (9630ft). While it’s low tide at the bottom and Mammoth Lakes and the Village have no snow (an unusual sight) the mountain has a good cover with all lifts and most terrain open.

Thanks to an experienced grooming team and cold overnight temps, all of the main on-piste runs have been setting things up nicely for some fast turns on the corduroy each morning. Sunshine, light winds and mild daytime temps made for a few fun days on the hill, especially with 90% of the terrain open. And the terrain parks are also in great shape. 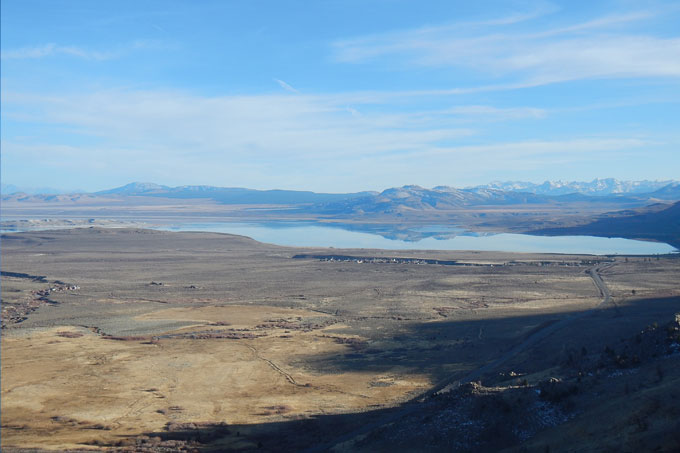 Mono Lake, the desert and the mountains.

Terrain parks are another area where Mammoth excels, the resort’s Unbound Parks consistently rated in the top 10 in North America. At the time of writing there are five parks open, from beginner to expert, including a 22ft halfpipe in Main Park.
.
Given its parks and natural freeriding terrain, Mammoth is home mountain to some of the biggest names in snow, including Olympic halfpipe champs Shaun White and Cloe Kim, freeride skier Chris Benchetler and the legendary Glenn Plake. Mammoth’s season usually lasts into June, and the resort is a spring-time mecca, attracting skiers and boarder from all over the world, including Australia.

While the mountain is the attraction for most people, the town of Mammoth Lakes and Mammoth village have a lot to offer with a big variety of retail, après and dining options. As I said earlier, the surrounding area is beautiful, with hot springs, lakes, incredible views and plenty of non-snow activities. 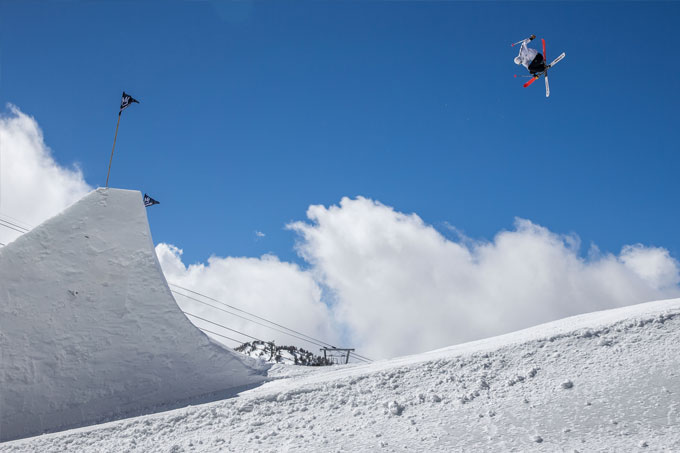 Mammoth’s parks are in awesome shape and scene to state of the art freeskiing. Photo: Mammoth Mountain

There is a vast array of accommodation options to suit all budgets. Staying in the village is very convenient with easy access to the mountain via a gondola from the village centre to the Canyon Lodge base. I can recommend the Village Lodge, right in the centre of the Village, with self-contained apartments, outdoor pool and spa – perfect for families.

While the last decent snowfall in Mammoth with good powder was in the last week of January, there was a 15-20cms top up on Feb 12 which brought some fun light, dry snow. This week will be fun. The temps have dropped back to mid-winter averages and more snow showers are due with another 10-15cms forecast this weekend.

As for the rest of the season, we’ll have to wait and see. March and April usually see a few good storms, so there may be a few powder days yet to come. 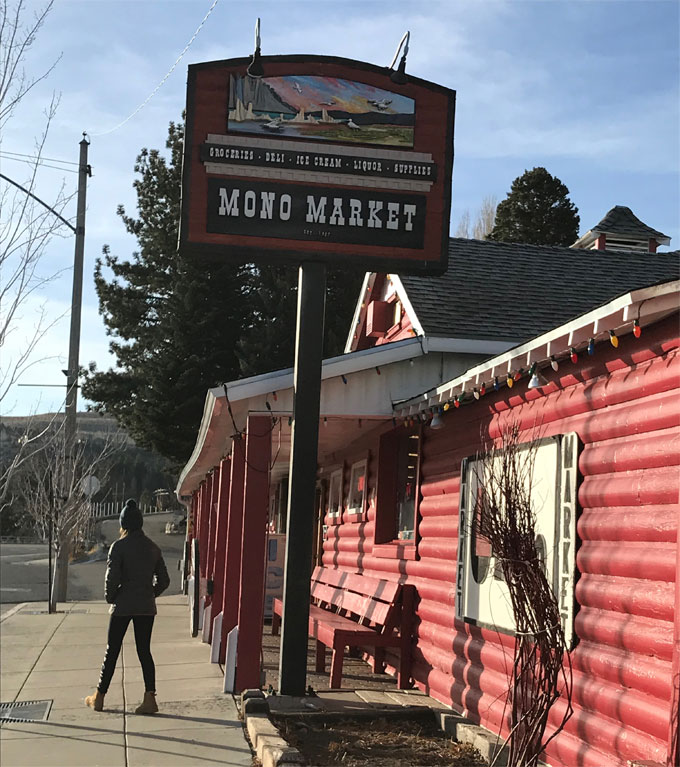