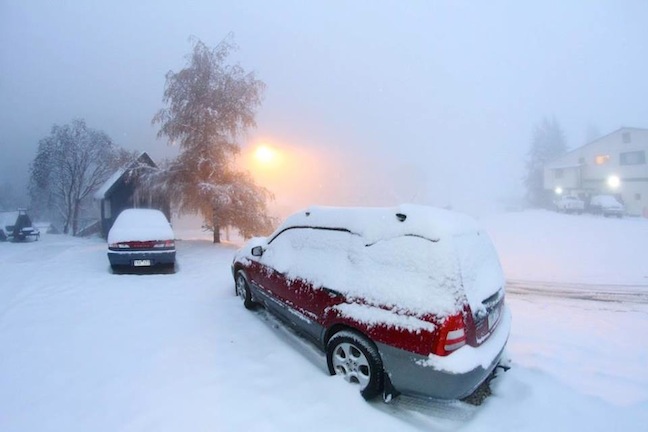 May snowfalls currently hitting the alps may be an early indication of what’s to come. Image:: Falls Creek

There’s a little something brewing in the Indian Ocean that we think you should know about. In the last two weeks several climate models have started to hint at further warming of the eastern Indian Ocean to the north-west of Australia, which is already warmer than normal (as per the image below).

Climate models are showing a warming trend in the Indian Ocean to the north-west of Australia, which is already warmer than normal Image:: Bureau of Meteorology

If the models are right, then this is quite a big deal, because we would be dealing with a negative Indian Ocean Dipole (IOD) event. During these events warmer than normal waters to the north-west of Australia pump extra heat and moisture into the air sitting above. The easterly winds that are common for this time of year also ease off a little, and the result is that we get more thunderstorm activity over the warmer sea that lifts moisture high into the atmosphere, where it is dragged south-east across Australia all the way to the Alps, increasing rainfall rates from May through to September.

The image below paints a picture of what this means. We have (arguably) had 11 negative IOD events in the last 55 years (a couple were borderline). These events had a median peak snow depth of 198cm versus a median across all years of 176cm. That’s good news in itself.

IOD events generally bring more rain to the Alps from June to August Image::Bureau of Meteorology

We can also narrow down our sample to winters that were ENSO neutral (like 2013 should be – neither La Nina nor El Nino). This leaves us with (arguably) seven IOD negative/ENSO neutral years out of the last 55 years, with a median of 232cm (woo hoo!). But get this: two of these years, 1992 and 1981, put on 316 and 361cm respectively, as you can see in the graph below. Another negative IOD event back in 1968 put on 307cm at Spencers Creek. Wouldn’t that be nice?

Here’s where things get a little tricky. Of the seven negative IOD/ENSO neutral years identified, only 1981 and 1958 had above average precipitation from June to August. The others received about average rainfall. I believe the really significant thing about these years was that temperatures were either average or lower than average – or more specifically, temperatures were lower than average when it was raining/snowing, so a greater proportion of precipitation fell as snow. These seven winters benefited from a tonne of low pressure activity south of the continent, which would have kept up a steady supply of cold fronts and cool westerlies.

So my (loose) theory is that a negative IOD event during an ENSO neutral winter not only creates an extra supply of moisture from the north-west of the continent, it also comes to the party with lower pressures south of Australia and a steady supply of cold fronts. The money shot occurs when this extra moisture is forced to rise above both the mountains and a cold front, and empties its tanks into the cold air below. Hello snow.

Laying it on the line

I think it’s fair to say the odds of above-average snowfalls this winter have increased because of the possibility of this IOD event. So:

That’s my take on this promising turn of events. We’ve been dealt pocket aces, but we still need a few events to fall our way before we win the pot. If I was on the verge of buying a season pass, this would push me all in. I’m gonna party like it’s 1992.

If you’ve got a different theory on what’s going to happen this winter then please hit me up at grasshoppermw@gmail.com or join the discussion via Facebook below…