The elements aligned during an El Nino dominated August in 2015. As you’ll read below that El Nino is dead and buried. Can we hope for plenty of this in 2016? Image:: Thredbo

In true Johnny Depp, Pistol and Boo style, it can be said that the Australian Alps are a wonderful mountain range. A treasure trove of unique plants, animals (myself included) and people (Reggae Elliss). They must be protected and we have to protect our winter. Ok, all joking aside folks, I can feel the anticipation building. We are only a short hop, skip and jump away from our first meaningful and lasting snow events. The surf is up and the rain-bearing clouds are visible on the horizon.

RIP El Nino
I mentioned in last month’s forecast that the El Nino that dominated 2015 and the first few months of this year is in its final death throes. The two images bellow illustrate this well. They show snapshots of sea surface temperature (SST) anomalies taken from December 2015 and April 2016. In December, a tight band of much warmer than average SSTs licked into the Pacific (a classic El Nino pattern). However, over the last month the intense reds dissipated as the El Nino powerhouse ran out of steam. 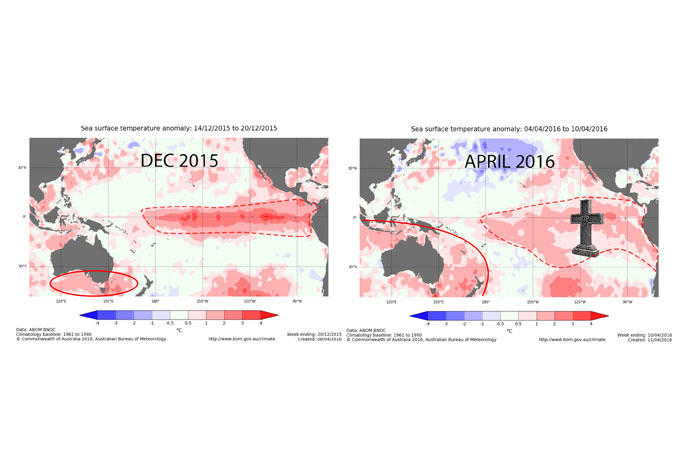 Something is brewing in the deep

The majority of climate models and observational evidence suggests that it is likely that we will enter into a La Nina ENSO phase by spring 2016. La Nina is the cold sister of El Nino, it is characterised by colder than average SSTs over the Eastern Pacific. Over the last few months I have drunk too much beer – so my thorax is a bit bloated – but I squeezed into my diving gear and swam down into the depths of the Eastern Pacific. I found that only the top 50m is still bathing in above average temperatures. Down in the murky jellyfish filled depths of the abyss (deeper than 50m) we find that the water temperature is below average. So, in a nutshell – we have a thin layer of warm water sitting over a deeper cold layer. This thin warm layer is expected to dissipate over the coming months. We will see the light red’s in the above map turn neutral and then finally blue by the end of winter. However, It is important to note that although El Nino is forecast to metamorphose into a La Nina state later this year this winter is still forecast to fall into a neutral ENSO state.

In April’s forecast I shared the good news that over the last 44 years roughly 20cm more snow has been recorded in neutral years compared to either La Nina or El Nino years. The spanner in the works here that’s holding me back from issuing a very optimistic seasonal forecast was the disgustingly warm SSTs recorded around the Tasman and The Bight – my line of thought was that they could have a negative effect on annual snowpack accumulation. 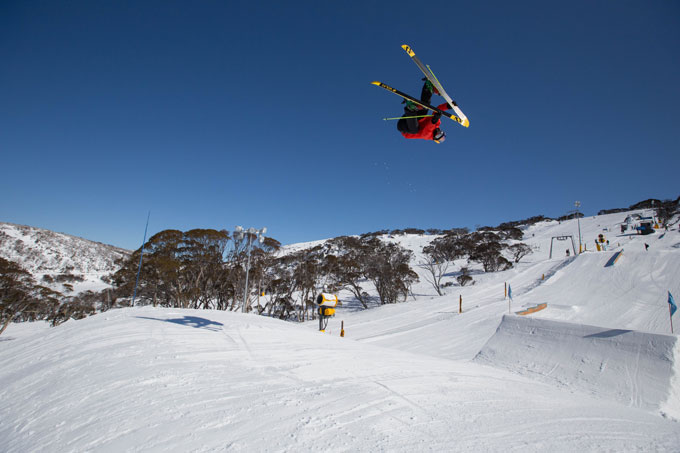 Russ Henshaw makes the most of the August conditions in last year’s Perisher Park Image:: Perisher

Put the Tasman on Ice

Unfortunately, nothing has changed since the last forecast. The SSTs are still more than one degree above average. We can clearly see this by comparing the SSTs from December 2015 and April 2016 in the above map. The area of warmer than average SSTs (the red colours within the red solid line) has even expanded during April. It’s not unusual that SSTs around Australia are warmer than average at the moment. When an important El Nino event declines, it often leads to warmer SSTs and a wetter and milder than average autumn. The climate model that forecasts the future evolution of SST anomalies has not changed its tune. Positive SST anomalies in the Tasman are forecast to remain for the winter while things look like cooling down a smidgen in The Bight. As we all know too well, snowfall in the Aussie Alps sits on a knife edge. To illustrate this, let’s cast our mind back to last year which was dominated by a potent El Nino. Classic high-pressure conditions gave way to an impeding wrong’un by late July. Who can forget the sneaky late August low which developed across Central Australia before swinging into the Tasman firing 50cm of wet snow onto Perisher and Thredbo on its back edge. SSTs were about average as this storm hit, causing the precipitation to fall as snow on high terrain. Should the SSTs have been 3ºC warmer than usual, that fine balance may have been shifted in favour of rain. 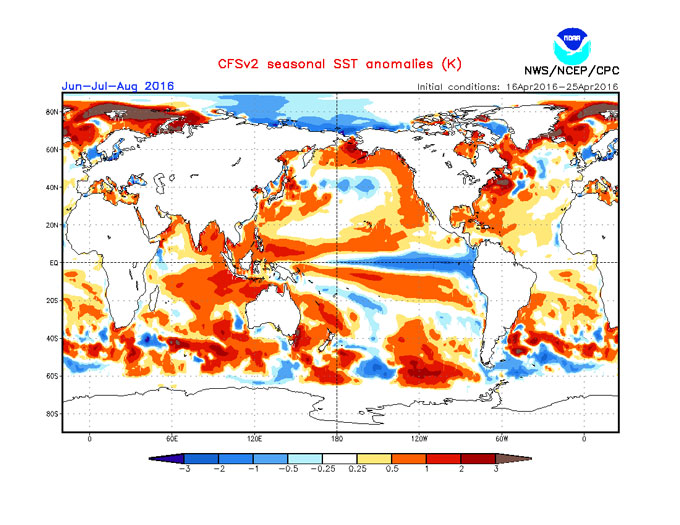 The SST anomaly forecast for June-August shows much higher than average SSTs to persist in the Tasman with things cooling down in The Bight. Note the La Nina conditions forecast to start developing in the East Pacific off the coast of Ecuador. Source: NOAA

SAM to the rescue?

In my previous forecast I mentioned that the Southern Annular Mode (SAM) has been positive for some time. A positive SAM index keeps the snow-bearing band of westerly winds clinging onto Antarctica. A negative index pushes the juicy lows towards the Australian Alps. Interestingly, the SAM index has turned negative over the last week or so. Forecasting the SAM index is unreliable so it remains to be seen if we can hold onto those negative values going into winter, or if this is just a short blip designed to give us false hope. I will keep my eyes on this one. 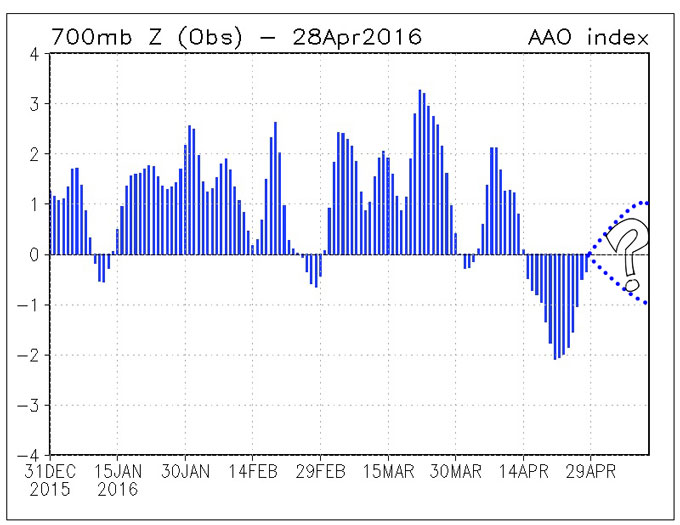 The SAM index has turned negative over the middle of April opening the door to low pressure systems reaching South Australia. But will it last?…. Source:: NOAA

Place your bets – when will the first flakes start to fall?

That humming sound you can hear to the south is the roaring westerlies which are waking up after their long summer hibernation. The models indicate that things will stay unsettled for the first week of May as a succession of cold fronts are set to slide over or near to the Aussie Alps. Don’t get too excited yet though folks, as it will be a bit too warm for snow at this point – it’s just too early in the season. But at least the surf will be up and things will definitely be feeling autumnal. High pressure will then build in around mid-month drying things out a bit.

As you’d all know by now, I believe that it’s important to declare everything in a long range forecast. The driving factors which led to the original April winter forecast have not changed enough to quash my SST fears so I am going to stick with a peak snow depth forecast of 170cm. Still, I have my antennae crossed that the SSTs cool down, the SAM index stays negative and that we can smuggle in a couple of decent early storms to give us an above average winter.

Check back in next month to find out how the opening weekend is looking to shape up, until then get down the gym and get squatting. Peace.

That’s all from the Grasshopper. We’ll update this outlook at end of May as the excitement builds. If you’ve got a different theory on what’s going to happen this winter, or just want to provide feedback, then please hit me up on the discussion below. Or you can follow me on facebook.