Last week’s storm came through as forecast, delivering good snow totals for the Aussie Alps, with the 40-70cms falling across the resorts, Falls Creek topping the charts.

After light snowfalls early last week, a cold front hit the mountains on Wednesday with very strong northwest winds that saw most chairlifts on wind-hold across the NSW resorts on Wednesday and Thursday.

In his forecast on Tuesday, the Grasshopper was calling 30-65cms the by the end of the week, but warned that, “Heavy precipitation and strong winds are forecast but the temperatures are looking a little dangerous.”

There was a mix of rain and snow across both NSW and Victoria with snow above 1750 metres.  Unfortunately the cold air missed Buller which received 10mm of rain by Thursday morning while Hotham and Falls saw 5-8cms of snow. The NSW resorts fared a little better, with a 24-hour total of 10-15cms above 1700 metres.

The temps weren’t the only thing looking dangerous as  another Covid-19 outbreak raised its ugly head in Melbourne. The result was Victorian government not only locked down Melbourne, but the entire state from midnight Thursday and Victoria’s ski resorts also had to close,  which coincided with the arrival of best storm of the year.

The temps dropped overnight on Thursday and Hotham and Falls were reporting 10cms on Friday morning while Buller had received 3-5cms. In NSW there was 10-15cms at dawn, but colder air moved through on Friday, freezing levels dropped and snowfalls increased across the resorts in both Victoria and NSW.

By Saturday morning another 30-40cms had fallen in all resorts and with cold sub-zero temps the snow was dry. While the resorts were closed in Victoria, the NSW resorts are open and with Sydney in lockdown locals and people from regional NSW and the ACT enjoyed a relatively uncrowded powder day. It was the best day of the year.

In Victoria it was case of two-hours essential exercise for people living in the resorts, and those who made the effort were rewarded with some dry powder turns.

After a short break in the weather yesterday and this morning, another cold front has hit the mountains and a bigger storm is due late in the week. This is lookignliek another good system, the Grasshopper writing in his forecast today that we should see moderate snow falls with 25cms on Saturday and to “expect the snow to begin Friday and carry through Sunday.”

No doubt for those in lockdown it is frustrating to see all of this snow, but no doubt businesses in and around the NSW resorts are counting on this week’s snowfalls attracting much-needed visitors from regional NSW and the ACT.

At this stage the Victorian government confirmed today that the lockdown will not end tomorrow night as hoped and has not given any indication of when  it may end. Hopefully, things will get under control soon and the Victorian resorts will open soon. When they do, there will be a good base waiting.

Check out the Grasshopper’s daily forecasts and our on-the-ground snow reports to see how this next storm is tracking. 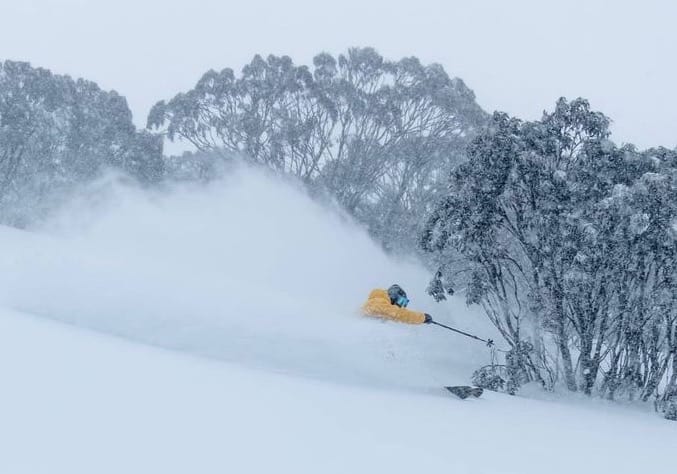