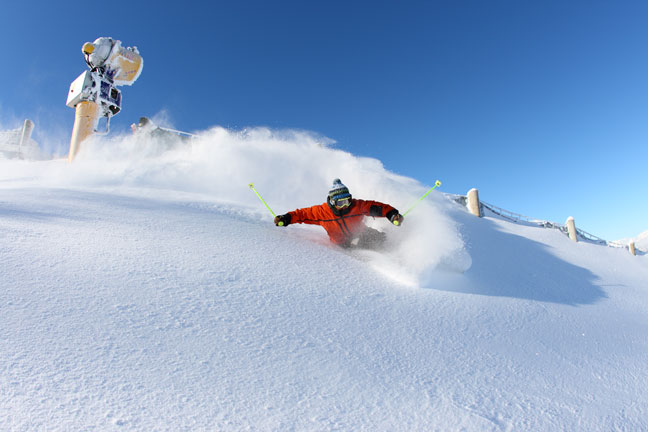 Who could have seen this coming in early July? Ski fields in the South Island were sweating after unusually warm temperatures and an almost complete lack of snow, and Ruapehu was just getting by.

Then Mother Nature pressed the big red button that sits on her desk and we got smashed. A low sitting about 1000 kilometres south-west of New Zealand directed a hard core west to north-west airstream onto the country for several days from around July 7 and with snow totals of one to two metres accumulating in many places the season was on.

We got another taste of Antarctica a couple of weeks later, with a big southerly push engulfing the country, taking snow down to around 300m on the Central Plateau. But little did we know the big one was yet to come.

The last week has seen people gorging themselves on powder – scenes reminiscent of Homer at the Duff Beer factory or that fat kid in Willy Wonka (the original movie, not that Johnny Depp crap).

I digress. This article is supposed to be about the outlook for snow in September. With snow bases around the country looking pretty healthy and your Australian brothers and sisters suffering from a deeply disappointing August, it could sound greedy to ask for more even snow. But face it, they’d do the same to you, so let’s check out what we can expect over the next few weeks.

First stop is a quick look at the seasonal outlook from NIWA, and to consider what the ocean temperatures are doing around the Pacific Ocean. The good folk at NIWA, as well as any other climate agency around the world, will tell you that conditions are fairly neutral. Sea surface temperatures around NZ are a little above average, so that might push up air temperatures a little, but generally what we can expect this September is average September conditions. So what the heck are they?

To answer this question, we want to look at averages of variables like wind, rainfall and temperature, and consider what makes September a bit different to winter.

The wicked wind of the west

The thing about September is that it comes at a special time of year, when the oceans to the south are near their coldest after a winter of seeing no sunlight. But at the same time, the sun is rising higher in the sky each day. Its overhead position during the month moves from north of the equator to south, and it starts to warm the oceans north of New Zealand.

Figure 1 below shows that from June to August, average winds at about 1500 metres high are below 5 metres per second over most of the country, except for a band of stronger winds over Southland. The average wind direction is slightly south-westerly. But Figure 2 shows that these winds increase markedly during September, with the band of stronger winds that was just south of the country
moving up over the lower South Island, and the average direction now north-westerly. 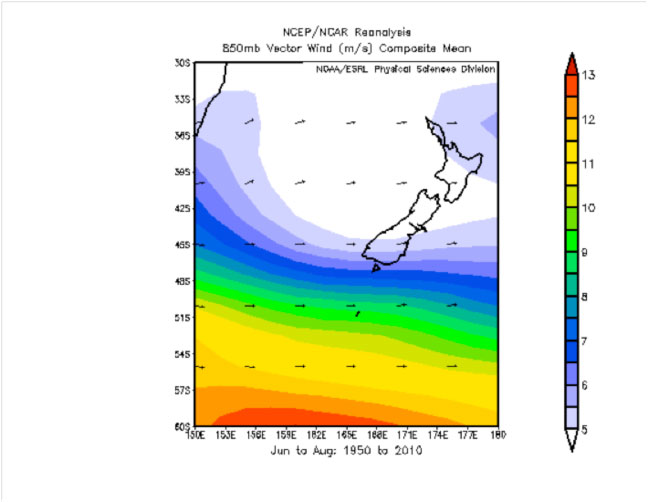 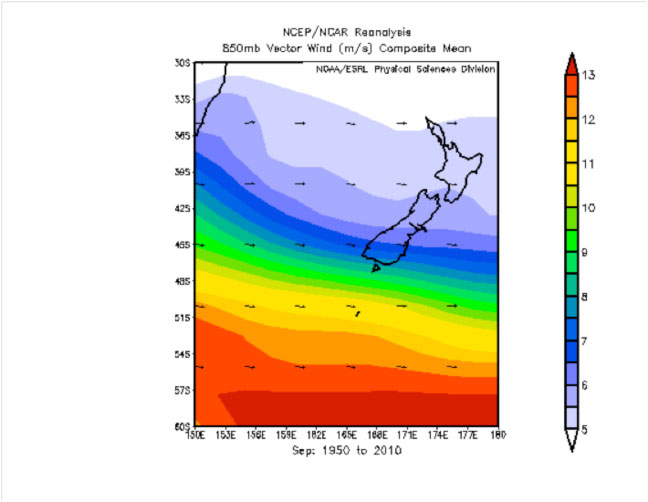 One of the key effects of these stronger westerlies is to increase the intensity of rainfall along the western sides of ranges, and decrease it on the shadowed eastern sides. For example, Hokitika sees about a 10 per cent big jump in rainfall from August to September, while Christchurch sees a 20 per cent fall.

Another interesting effect is that the water vapour condensing to cloud and rain on the leeward side of the Alps in a nor-wester releases a lot of latent heat energy that warms the air. When the air descends back down the eastern side of the ranges, and is re-pressurised at lower elevations, it can easily end up 10 degrees warmer than it started. Anyone that lives on the Canterbury Plains knows what I’m talking about; they even named a beer over it.

Of course this warm dry air is no good if you’re a snow flake. Our Kiwi snow forecaster Ben Taylor put it like this: “The NW flows of spring seem to build over three to five days before a front hits, and completely #$%^ the snowpack. I’m watching it disappear out the window now.”

Right. Thanks Ben. But didn’t we say something about extra rain out west as well? How much of this rainfall will come down as snow on the slopes?

It’s got nothing to do with daylight saving

In the free air, away from ground heating and cooling, the temperature rise is a little less, but we can still expect 1 to 2 degrees difference. Compared to winter, you would expect this to lift the level at which snow falls by a couple of hundred metres on average. In other words, the rain edges further up the mountains. This is clearly going to be more of a problem for slopes at lower elevations.

Get to the point Grasshopper

But that’s only talking averages. Probably the most important thing to point out is that the strong westerlies we’ve been talking about generally shift from two or three days north-westerly winds, culminating in heavy rain in the west, to a day or two of south-westerly winds and snow once cold fronts travel past.

As the freezing level ebbs and flows between about 2300m and 1000m, we get rain, turning to snow, some fine weather and then back to rain again.

Ben Taylor again: “The southerlies of spring are a wonderful thing and seem to pack a bit more aggression than those during winter.

“I guess you could say that all the ‘weather’ becomes increasingly volatile as the air warms – it’s windier, it’s wetter in the mountains, and the southerlies pack more punch when they do come through.”

“And when a high swings through after a southerly storm the powder is as good as anything that falls during the winter months – for a few days at least.”

So it’s not all bad. New Zealand is already stuck in a very spring-like flow, with models
forecasting winds to swing from NW to SW and back again about three times in the next week.

It’s not much of a forecast, but there’s nothing to suggest September in NZ won’t be similar to your stock standard September that I’ve tried to describe above. The slopes will get some rain, they’ll be treated to a little snow, there will be fine patches to enjoy it all, and the snow depth will slowly decrease, before falling off a cliff in October.

Think I’ve got it wrong? Email me at grasshoppermw@gmail.com and give me your prediction. If there’s enough response we’ll publish all the different opinions and make a game of it.
That’s all from the Grasshopper. 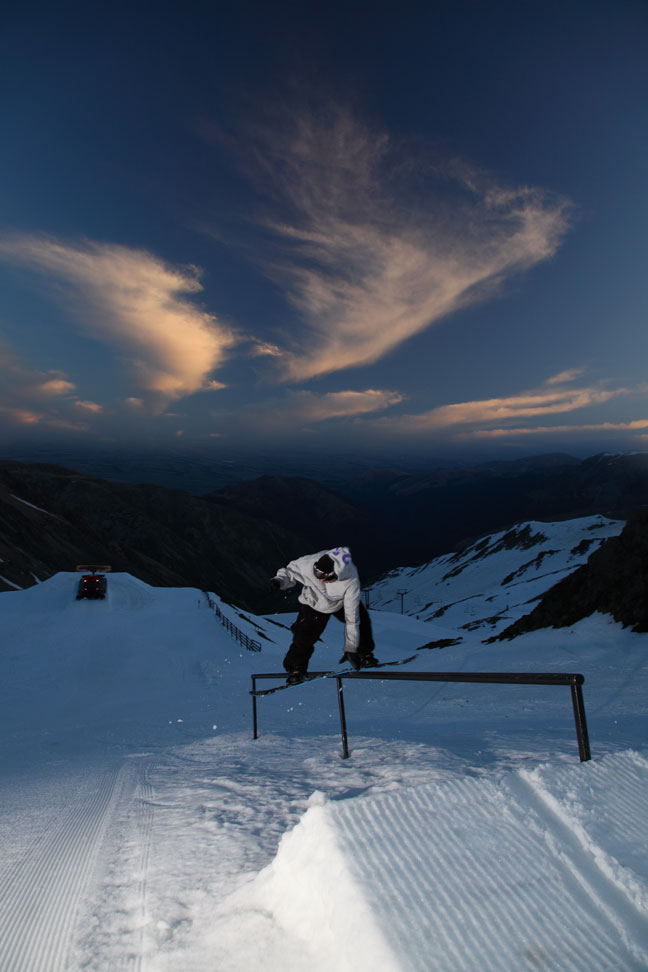