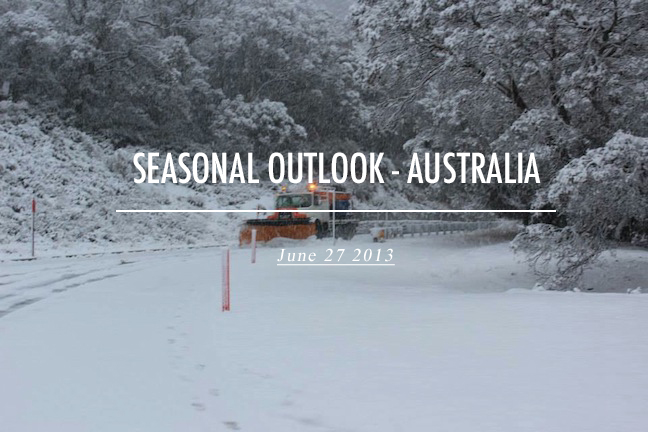 Snow to low levels earlier this week eased the anxiety in the last week of June, things are better but we could do with more Image:: Thredbo

This is an interesting seasonal outlook to write. Not only is everyone hanging out for a steer on the rest of the season, but I also have some ego in the game, after identifying increased potential for a good snow year back in mid-May.

Since then we’ve had:

Not a decent cold front in sight. Not yet anyway. And so the hurt goes on for me to either stand by my earlier forecast of 198cm for the peak snow depth at Spencers Creek, or ditch it for a lower figure after the bad luck of the last month. But that’s not really what this outlook is about. What it’s about is your season pass, your holiday booking, or your job if you’re relying on the ski season to finally show signs of life.

So we’re going to do three things:

1) Look at where we are now at Spencers Creek, here in late-June, and compare this to history. (Until I get some long term stats for a Victorian resort I’m going to have to continue just looking at NSW)

2) Look at what’s happened with the seasonal forecasts in the last month, and consider whether things are still looking as positive (forgetting for a moment the terrible start we’ve had).

3) Put together some tasty stats on historic snowfalls from July onwards to give you some idea of what we’ve still got to come.

Where are we now?

On June 20th Spencers Creek was on 11cm. But Perisher is reporting 46cm over the last few days. We won’t get the next reading at Spencers for a day or so, but it’s probably safe to assume we’re now on around 50 to 60cm. Wanna guess the median snow depth on July 1 at Spencers Creek from 1954 to 2012? Drum roll please: 61cm. I know things are worse elsewhere, especially about Hotham and Falls, but the first thing to realise from this fact is that at Spencers Creek we’re literally just a few centimetres of snow, about small cold front, from being on an average year.

What’s happened to the seasonal forecast?

In two words? Not much. Climate models haven’t really changed. We’re still expecting a negative IOD event, combined with a neutral ENSO event (read a better explanation here) which should guarantee average to above average precipitation for the Alps during July and August. And that should still come with enough cold air to ensure that a good proportion falls as snow.

In the last month we’ve seen the precipitation, and we’ve seen the cold air, but we haven’t seen them line up like we need them to. That’s where the random luck of the weather meets the averages of seasonal forecasting. But the deeper into winter we get the better our chances the rain and cold air will come together. 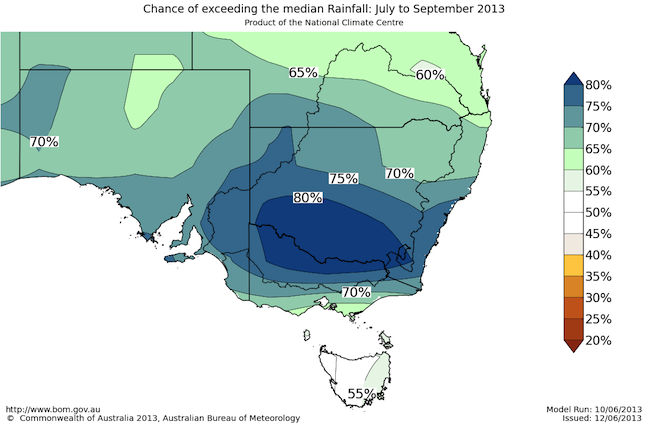 The period July through to September is still more likely than not to see increased amounts of precipitation, now we need the cold air to come to the table Image:: Bureau of Meteorology

Having said all that, we’re still going to need to get started with a decent event pretty soon. Those of you that have been reading the extended outlooks in my daily forecasts will know that I have got my eye on a potential front coming through around 5 July. It’s not a sure thing at all, but it’s hopefully going to be 10 to 20 cm to get July underway.

What does history tell us?

We were never going to do this all in one month, and we’ve still got two good ones to come. Let’s call ‘em Juicy July and Awesome August.

How good might they be? Well in May I identified seven similar years that were negative IOD events but ENSO neutral (like this year – ask any other forecaster and they’ll identify a slightly different set of years, but the flavour of what I’m about tell you shouldn’t change too much).

Here’s the rub: the median increase in snow from the first of July onwards during these seven years is 152 cm. The minimum was 104 cm. The maximum was 278 cm. Take the 50 to 60 cm we’ve already got, add the totals for July onwards, and we’re still looking at a potential range of between 150 cm and 330 cm, with the most likely outcome somewhere around the two metre mark.

Or we could take a broader look: In the 18 years since 1954 where the snow depth has been between 35 and 65 cm the eventual median peak snow depth is 174 cm, compared to 187 cm during all years since 1954. So if we got an average July/August, we’d be close to an average year, and the good news is we’ve got a good climate forecast to eventually tip things in our favour.

Or one last slice and dice: Over all the years since 1954 Spencers Creek has added a median of 126 cm from July onwards. Add the 50 to 60 cm we’ve already got, and once again you end up with around 180 cm if July/August are average.

I came into this outlook thinking I’d do a bit of research and be forced to reduce my forecast for peak snow depth at Spencers Creek. But with all the evidence stacked up I can’t bring myself to move my prediction of 198cm.

What I will concede is that the chances of a really big year (230+ cm) have reduced to about 1 in 5, the chances of less than 150cm have increased to about 1 in 4, and it may be early August before we break the 1-metre mark. But so much can happen from late-July until late-August that we simply can’t give up on the season because we’re a little short of base at the end of June.

That’s my take. This seasonal forecasting is hard at the best of times and I welcome all input. If you want to let us know what you reckon please join in the Facebook discussion below.