“Covfefe” that’s Trump’s term for … er who knows what … What’s a little more certain is the snow fall this week, but will it be enough to get this Aussie winter back on track? Image:: Falls Creek

Despite the constant low amounts of natural snowfall: covfefe. Sorry, couldn’t resist that one! So, what exactly happened? The last significant natural snowfall we had was the 20cm way back on May 28. Since then things have been as dry as a bone aside from a few passing flurries from time to time and we aren’t even in an El Nino year! The very fact that we are sliding down the mountains at all is mainly due to the excellent snowmaking effort – so please, let’s take a moment to give a giant round of applause to the snowmaking teams. This season was always looking like it would be a bit of a tightarse but is it time to get out the worry beads? Gather around and take a seat. A lot has changed since the last update. We finally have some natural snowfall on the way… but will it be enough to salvage the 2017 season as a whole?

Well you remember our old friend SAM? No, not the random fella who was chatting you up at Kareela Hutte before your last run of the day but the Southern Annular Mode. SAM is an index which we use to describe the north/south position of a band of low pressure systems which encircle Antarctica. When SAM is positive the band of juicy lows contract towards Antarctica and we are more likely to experience high pressure over Australia blocking off cold fronts to the south of the Aussie Alps. Conversely, a negative SAM means that low pressure systems, cold westerly winds and fronts are more likely to cross the Aussie Alps delivering bumper snowfall.

Let’s take a look at the pressure anomalies for June: 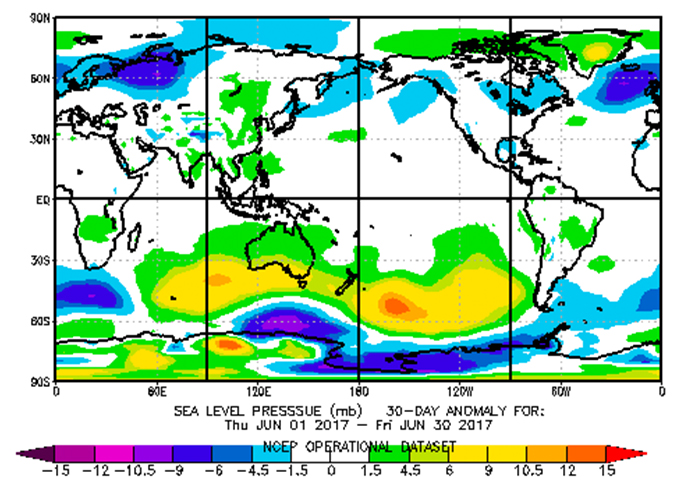 A classic positive SAM signal. A band of higher than average pressure kept the lows way to the south this June leaving us snowless. Source:: NCEP

So far this winter the SAM index has been positive. This means that we have seen lows hugging the Antarctic coast and cold fronts blocked to the south of the Aussie Alps. We saw front after front scrape by to the south, this meant that light snow showers were more frequent (but still insignificant) in resorts such as Mt Buller than Perisher. It is not unusual for June to take a while to get going but 2017 is a plane hurtling rapidly towards the end of the runway at only 10km/h.

How does 2017 compare to other years so far?

The short answer is BADLY but with some redeeming factors worth mentioning. We can thank Ullr that we had the late May snow. Plenty of crisp nights meant that the snow guns could get fired up to make up for natures shortcomings. Still, if you take a look at the image below there is no denying that so far this season is one egg short of an omelette.

It is official! we just lived through the driest June on record in our part of the World. Source:: NCEP

I mentioned in last month’s forecast that early snow is not always a good indicator of a stellar season and this is certainly proving to be true this year. We are already lagging below the mean snow depth for the start of July…and considerably so. There are only a handful of seasons which took so long to get off the ground. Last year was a different sort of beast – we saw significant snow (70 cm +) at the end of June put us in safe territory. However, we don’t have to scan through the history books for too long to find other bad apples. 2015 also had some light early season snow which disappeared only to skyrocket the second week of July. 1959 was a no-show until the first week of July when cover started to build. Perhaps one of the most worrying seasons of the lot was back in 1967 when cover remained under 30cm all the way until August before shooting up by a metre.

Back in April when I issued my first Seasonal Outlook of this year an El Nino was looking likely. The majority of international climate models were forecasting the development of El Nino conditions during winter. That has now changed and all climate models support the idea that neutral conditions will prevail for the entire winter. We can now say with confidence that SSTs which were anomalously high in the Eastern Pacific in March/April and that are now close to normal, will remain that way for the rest of the winter. This is not too surprising – ESNO forecasts made in autumn are generally less accurate than forecasts made at other times of the year. 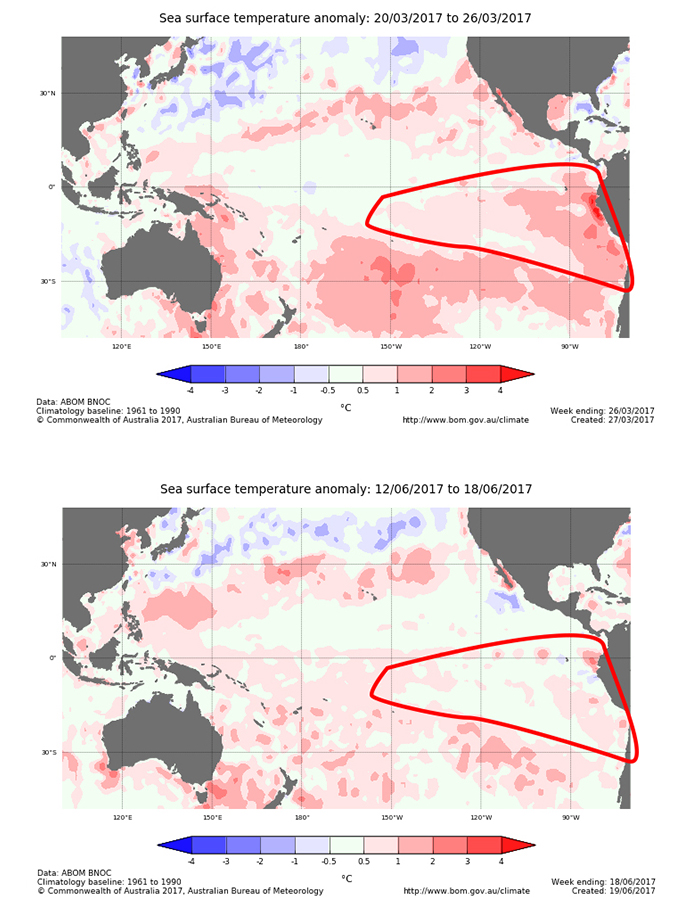 SSTs in the Eastern Pacific (area inside the red line) were warmer than average back in Autumn. All that has changed for now (Bottom image), we are well and truly in neutral country. Source:: BOM

Yeah but Grassy what does that mean for snow in the Aussie Alps? Well in theory it should be good news for snow. And I say in theory because sometimes the weather doesn’t like to play ball. Neutral years register on average 20cm more snow than El Nino or La Nina years. However, the pressure patterns that we have seen so far this year are more in line with what we might expect during a classic El Nino year i.e. a big fat high parking its arse over the Aussie Alps blocking out all the moisture to the south. This leads me to think that the positive SAM index and almost-but-not-quite positive IOD index are holding the winter to ransom.

Most importantly I think we need to chill. We live in a black and white, yes or no World. The media often demand short explanations about these super complicated climate phenomena but some things take longer to explain. When we try to work out what sort of weather we will cop in the Australian Alps during winter, we’re faced with a bi-polar set of outcomes that bears almost no relation to the strength of the early indicators of El Nino in the Pacific.

It gets better… Or Does It?

The SAM index is difficult to predict but it normally demonstrates some degree of persistence over several months before flipping from positive to negative or vice versa. 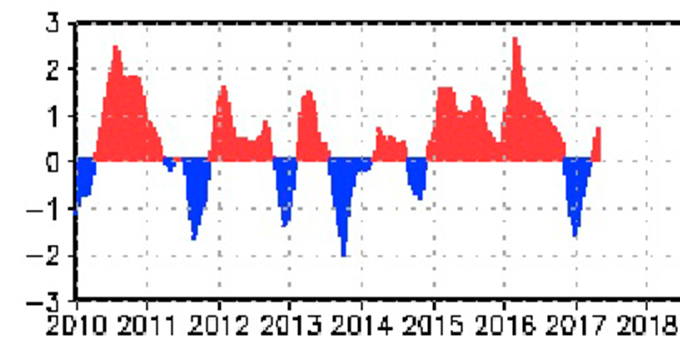 This sawtooth pattern to the SAM index is characteristic. After going negative for a few months it has recently turned positive. Source:: NOAA

As you can see, it has recently switched positive and the chances are that it will remain that way over winter meaning we are likely to see a reduced number of weather fronts reaching the Aussie Alps. Combine this with a possible positive IOD and things are not looking good.

We do have snow forecast for this week but it’s not going to be a major storm the likes of which we saw in late June 2016 or after the first week of July in 2015. We can expect about 30-60cm of additional snow to accumulate by mid-July. This does not mean to say that conditions will be bad all the time. Colder temperatures and snowmaking combined with the forecast natural snowfall means that there will be plenty of good days to look forward to. However, in terms of the whole season we need to face up to a couple of hard truths:

Keeping this in mind I am forced to shave my 160cm peak snow depth forecast down to 150cm. This is against a long-term median of 176cm. It isn’t all doom and gloom however. I’d like to repeat that although we are still heading towards a worse than average season it does not mean that the conditions will be consistently bad over the next couple of months. This time next week we will have fresh snow and spirits will be high. We will still see storms roll through in July and August – Just perhaps not as many as we would like and crucially not as many big dumps as we would like. I hope that I am wrong but we will have to wait and see. Surfing through the interweb I found this cute explanation of SAM from climateKelipe . It’s well worth watching in order to understand what’s going on at the moment. I hope to see you up on the slopes this week to take advantage of the new snow. Peace.

That’s all from the Grasshopper. We’ll update this outlook in early July. If you’ve got a different theory on what’s going to happen this winter, or just want to provide feedback, then please hit me up on the discussion below. Or you can follow me on facebook and be sure to sign up to my weekly insights below …