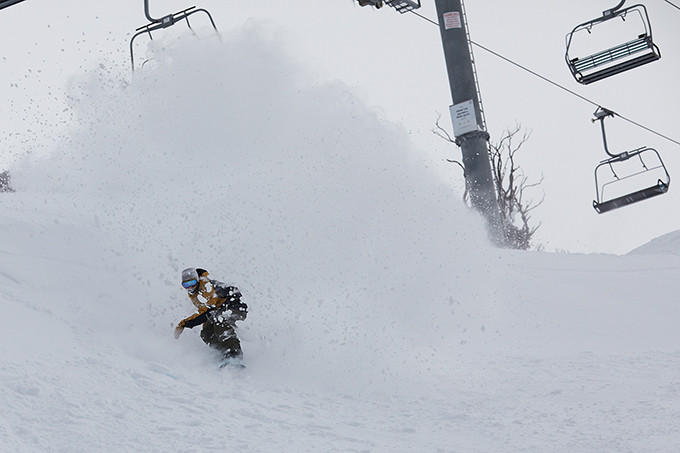 They came for the Banks but stayed for the Powder. Austen Sweetin deferring from what was set to be another podium finish at this year’s Transfer Banked Slalom. Photo: Andrew Fawcett

With what was set to be the weekend of the Fourth Annual Transfer Banked Slalom, now run and remaining un-won – we sit here, not wondering why but instead with a big ‘ole grin on our faces, marvelling at the weekend that was. Without further ado, a recap of the race that never ran and a tale of the Australian snowboard spirit.

If Australians weren’t a determined bunch, we’d probably have perished on this giant hot rock in the middle of the sea some years ago. But in the face of adversity, we remain persistent … to not only exist but to thrive. This mentality is adopted by all who’ve ever sat on a chairlift whilst being belted in the face of a good-old fashioned Aussie Blizzard. Sago snow and all. Conditions we’ve come to know … and know not to flirt with. Last week, Thredbo’s incredibly determined park crew experienced the full gamut, from prolonged downpours to dropping freezing levels, gale-force winds and then outright blizzard conditions. in short, the worst conditions to construct a course in. Even Matt Galina, a man who has no qualms shovelling at 3 am in the morning threw in the gloves. But instead of throwing his fist in the air and bellowing out ‘why’, something much more profound happened … 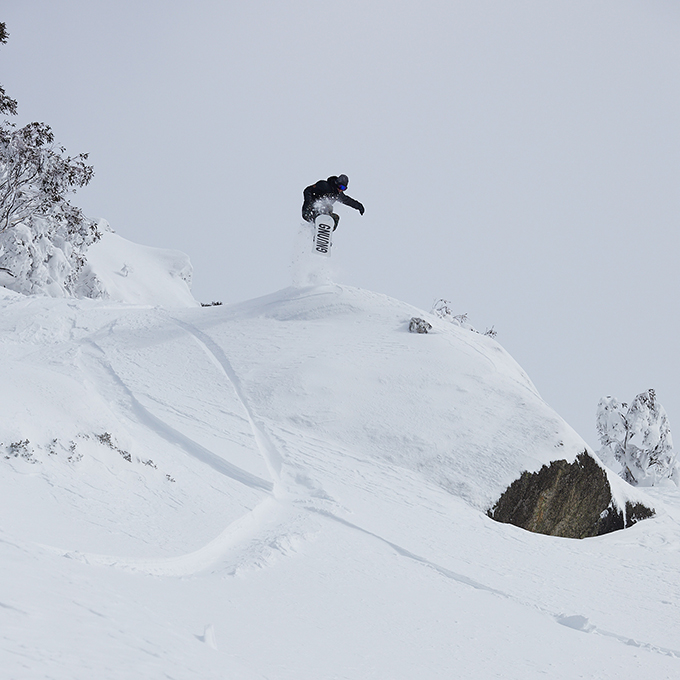 The tribe had begun its migration, and legends like Marcus Stocker had already begun attacking hits all over Thredbo by Friday. Image:: Andrew Fawcett

The Gathering of the Tribe

As I packed the last of the trophies into boxes, ready to load them up into our VW Amarok (Nice car btw, read the review ) I got the call, alerting me of the call that had been made. A tad numb, I felt for Matt and the crew who had tried to persevere and got as far as shaping 50% of the course. Having participated in the past 3 Transfer Banked Slalom’s, 50% in those conditions was no small feat – undertaking the construction of a one-kilometre course that’s mostly shaped by hand would be marvelled at even by the most dismissive convict labourers. As a unit the team was broke. But the tribe wasn’t, undeterred by the very ethos of the Transfer Banked Slalom, that being ‘The Gathering Of The Tribe’ – The tribe did gather and from all pockets of the snowboarding community. 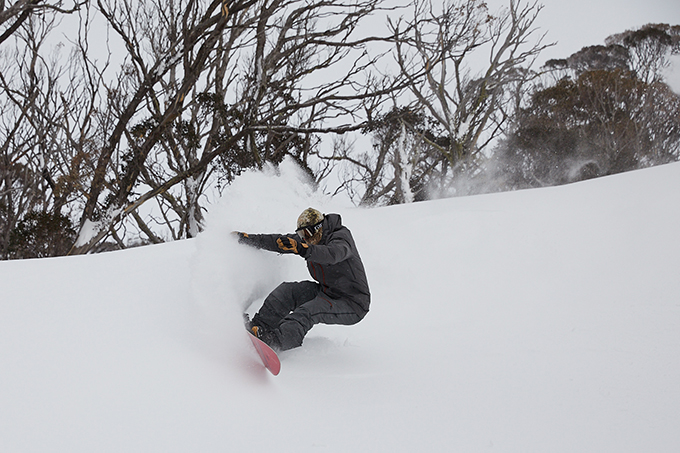 Bryan Fox has a strong affinity for surfing, and having travelled all the way down to Australia – he wasn’t prepared to go home empty handed and sought to replicate the pumping lefts of Kirra that week on those high country hills. Image:: Andrew Fawcett

It was beginning to dump snow, as part of the blizzard component of the week. The migration had begun and as I received phone calls en-route to Thredbo, regardless – there was a universal positivity embraced by all, surely powered by the thought of scoring some powder turns in the absence of banking them on berms.

Since its inception in 2014, The TBS has become not just a rite of passage for the Australian Snowboarder but a mandatory experience for some of snowboarding’s elite. This year, Bryan Fox had received the good word from his also-attending boardin’ buddy Austen Sweetin that the event was happening and come Saturday morning, two of the most respect snowboarders in the planet had ventured as far as Thredbo to partake in the simple joys of riding. Met by the announcement that there would be no racing this weekend but before disappointment could set in, that spirit of Australian Snowboarding stepped up and a whole bunch of crew would come forwards to show the Quiksilver heavyweights the terrain we hold so dear, and share conditions rare for this climate. 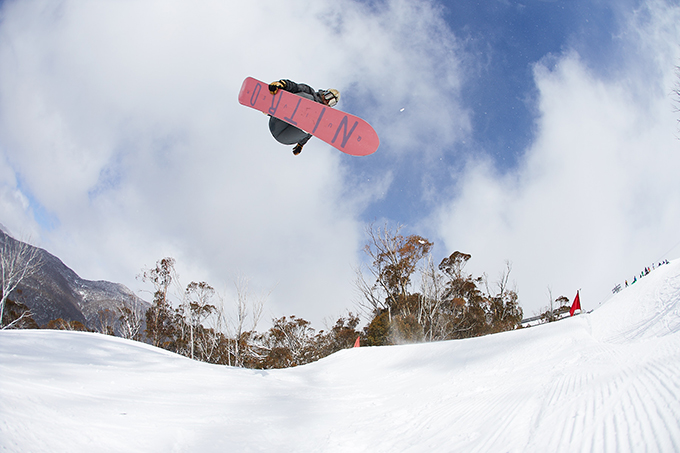 A last minute Merritts Rave was called, and Bryan Fox joined a the park-lap conga line once the remaining powder pockets had been tapped. Image:: Andrew Fawcett

The snow was deep. The snow was light. And when the sun came up on Saturday morning, both Bryan and Austen would join in on the festivities. A last minute ‘Power Rave’ was announced, and Thredbo’s terrain would be defaced by the edges of snowboarders. In the morning, crew’s correspondence and took on pockets of the mountain. From windlips to rock hips, nothing was sacred. To the side, Stanley’s was slashed apart, with what Austen describes as the ‘Perfect Australian Left Handers’. As the sun rose, side hits down Ballroom became home to riders like Andy James , who proved his riding well-beyond his urban arsenal. The crew filtered down into Merrits Terrain Park to visit the crew at Amy’s Kitchen to taste their organic offerings. And they came in droves … 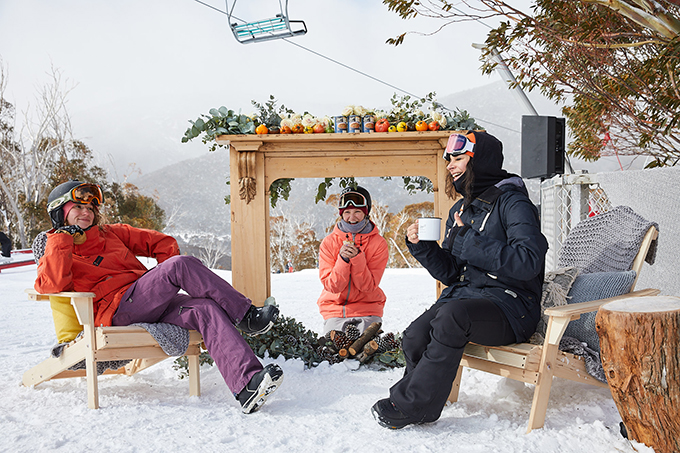 Tasty Burritos and delicious soups made no one miss the usual snag sizzle. Andy James drank 30 cups of the lentil vegetable soup while the likes of Charles Beckinsale and Ryan Tiene cut hot laps through the Merritts Skate Park like they were filming for their Madplay video parts back in 2002. Harry Crean lapped with Tom Reilly , both cover-boys for Transfer and after taking a 2-year hiatus, pledged to never take that much time away from ‘boarding again. Meanwhile, 4th place finisher in the Mt Baker Banked Slalom and snowboard legend Mark Cowley rammed orange conduit through the park and pronounced that he was the fastest on the hill, and anyone that could beat him through this make-shift course could have his board. Too bad, ‘cause none of his 30-odd challenger’s did pass him, despite the pushing and shoving (all encouraged). It was chaos, and despite Jai West howling into the megaphone from the over passing chair lift, the snowboarders and their efforts could not be contained. As riders disbursed, one thing remained clear – the tribe came together and celebrated this act of snowboarding in more ways than one. I couldn’t help but feel like I was a part of this blossoming community. Australian snowboarding, you made me proud. 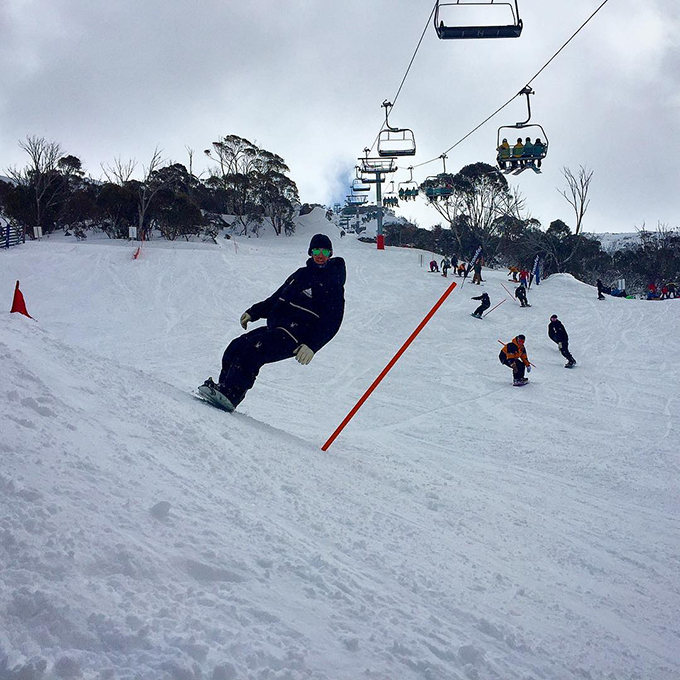 Mother Nature might have prevented us from building the course we desired but she didn’t stop us from zig-zagging a make shift slalom and peelin’ up each other’s top sheets. Image:: @Thredboparks

Only one question remains, what future date has been decided for the Transfer Banked Slalom? We’ll be getting back on the grid, this time in spring, on September 15th – we’ll be release more information about this later on in the week as we lock down the surrounding schedule of events. All we can say is that the TBS will be the first event to usher in a whole new level of snowboard celebrations. Stay tuned and keep those edges sharp. 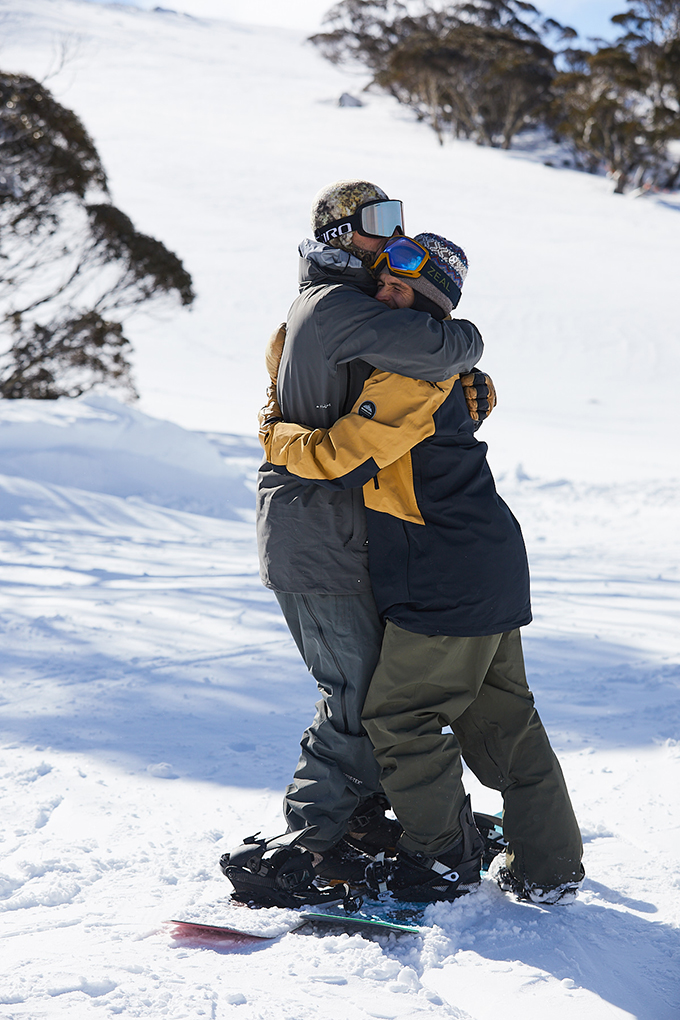 They might’ve only briefly visited but Bryan Fox and Austen Sweetin really felt the spirit of the local snowboard community on Saturday. Image:: Andrew Fawcett