The 2022 season wrapped up two days ago, Charlotte Pass, Buller, Falls and Hotham closing on Sunday while Perisher and Thredbo pulled up stumps on Monday afternoon. It was a good closing weekend too  – sunshine, spring snow, pond skims and a lot of fun.

It was an appropriate end to a pretty good season, one that enjoyed the deepest snowpack since 2017 and one where everyone was stoked for some normalcy after the Covid disruptions and lockdowns of 2020 and 2021. There was also a pent-up demand from Australian skiers and snowboarders to head back to the mountains and bookings were high, all resorts and nearby regional towns enjoying above average visitation.

As for the snow, consistent may be the word for this winter with lifts open from the first weekend to the last.  While we had our share of wet days and only a handful of good powder days, smaller top-ups between the bigger storms maintained the snowpack for the duration of the season.

The season started off with a bang courtesy of two solid pre-season snowfalls, the first one dropping 35-50cms of snow May 30-June 1. This one was a true cold winter storm with the snow level down to 1300m and periods of heavy snowfalls and temps down at -7 which saw the snow guns firing across all resorts. It was the ultimate pre-season marketing tool, the mainstream media giving the “Polar Blast” a lot of airtime and psyching people for a visit to the snow.

That storm left a good early season cover and the result was Perisher, Buller, Falls Creek and Hotham, all getting out of the gates early and opening a few lifts on Saturday, June 4, a week earlier than planned. Then in a perfect scenario a second storm hit on June 6 and it was bigger and colder, dropping another 70-100cms down to low elevations across a three-day period, taking the snow totals for the two storms to 130-150cms.

The result was the best “official opening weekend” in years, with all resorts having multiple lifts and a good amount of terrain open on June 11th.  It was the best opening day I can remember here in Thredbo with quality powder turns and skiing to the village, the first time on opening weekend since 2000.

Snowy Hydro’s Snow Depth reading at Spencers Creek (altitude 1830m) was 118cms on June 15 and all resorts had a very good early season base. The rest of June was pretty quiet for snowfalls with a dusting on the 16thfollowed by10ms on the 22nd and another 5cms on the 27th.  The snowmakers enhanced the cover when they could and by the time school holidays rolled around the resorts were close to 100% operational.

The start of July was bit mucky as a southeast airflow directed moist, mild air and showers across the resorts before we had a run of fine weather, snowmaking and hardpacked snow. Light snowfalls dropped 5-10cms on the weekend of July 9-10 ahead of another week of skiing groomed runs on hardpacked snow, but there was a change on the way.

The Grasshopper’s weekend forecast on July 15thwas looking good, and he was calling snowfalls down to 1100m for Sunday July 17th, the snow continuing overnight. The cold front hit as expected with strong winds and blizzard conditions at times but those who braved the conditions scored fresh tracks all afternoon, and it was the best day since opening day on June 11th. By Monday morning the storm had dropped a healthy 30cms.

The back half of July was a mixed bag with a few drizzly days and a couple of 5cms top-ups on July 27thand 29th, taking the snow depth reading at Spencers Creek to 129.5cm at the end of July.

During July there were also an unusually high number of avalanches being reported, not only in the backcountry, but also in the sidecountry near Thredbo and Hotham. While there had only been a couple of solid snowfalls since the pre-season storms, the small top ups over that period were accompanied by westerly winds which caused significant wind-loading in the backcountry.

The result was a number of avalanches, some triggered by skiers, others natural occurrences, and our weekly backcountry reports from the Mountain Safety Collective, carried a number of warnings during this period and urged people to be extra cautious in the backcountry: “Why were these avalanches all happening? Because the new windloaded snow was not bonding well to the hard, icy, bed surface from the season’s initial snowpack, and sliding on that layer.”

August started off well enough with 25cms on August 1st, but things quickly turned ugly, the Grasshopper writing in his forecast on August 3rd, “The next few days are perhaps the worst I’ve forecasted this season so far. We’ve got heavy rain and thunderstorms, gale force winds and low visibility in what will be a horror show, as a monstrous low-pressure system about the size of Australia slides under us from the west.”

He wasn’t wrong, and the mountains copped a soaking from August 3-5, particularly in NSW with Perisher seeing 175mm of rain over a three-day period while Thredbo had 134mm.

In a first on Wednesday August 3rdThredbo made an early call that due to the extreme weather forecast the resort would not open the following day, the mountain ops team keen to protect the cover by keeping the heavy grooming machines, snow mobiles and skiers off the soft rain-soaked snow.

The Victorian resorts were spared the brunt of precipitation but still recorded up to 85mm of rain.  The rain turned to snow on Friday night leaving 10-15cms over the weekend of August 6-7 and colder temps saw the snowmakers top up the cover on the main runs and repair some of the damage at lower elevations.  However, other than a few creeks breaking through the surface the rain did not cause the damage you would expect and on August 9th Snowy Hydro’s snow depth reading at Spencers Creek was a surprising 146cms, up from 128.5cms on July 27.

Fortunately the rest of the month the weather pattern was more typical for August with a couple of  cold, windy storms, some wind-hold days and a few really good powder days.

The days week after the deluge were mainly fine with firm hard-packed on piste skiing before a series of cold fronts from saw 40cms of snow from August 12-17 with August 16th the pick after 15cms overnight and temps down at -5.

Another storm hit on the weekend of August 19-21, and the afternoon of August 22 was another wild, windy and snowy day but once again, an afternoon constant refills and fun storm skiing. The snow eased overnight leaving 20cms of fresh and just a few snow showers on August 23, but the first two or three hours were epic before it was tracked out and the temps climbed.

That storm also saw Snowy Hydro’s snow depth reading crack the two-metre mark for the first time this season, coming in at 204cms on August 24. The last week of August was mainly fine gradually warming up as spring approached, with rain on August 29 and a little snow up high to see out the month.

The first half of September had a bit of everything, sunshine at the start of the month then a few days of rain with some snow up high – all pretty typical for spring.  On Monday September 12th the Grasshopper mentioned potential snow for the following weekend and it kicked in on September 16th, with 45-60cms of snow by the time the storm cleared on September 19th.

As you’d expect for September it wasn’t super cold, the temps hovering around zero to -3 during the storm and while it wasn’t light powder it was nice to get another round of fresh tracks. It also took the Spencers Creek snow depth reading to a healthy 232cms on September 20th, the deepest since 2017.

Since then the weather has been pretty ordinary, mainly cloudy with drizzle at times and a soft cover thanks to mild temps with only a few days with a melt/freeze cycles and good spring snow. We also had another day of heavy rain last week on September 29thwhen 50-72mm fell across the mountains, Buller the exception which enjoyed some nice spring weather.

In his first season outlook the Grasshopper said we were in for a wet winter with milder marginal temps but most of our snow comes from “infrequent, big storms events, which may have no sway on temperatures averaged out over a month or season”. 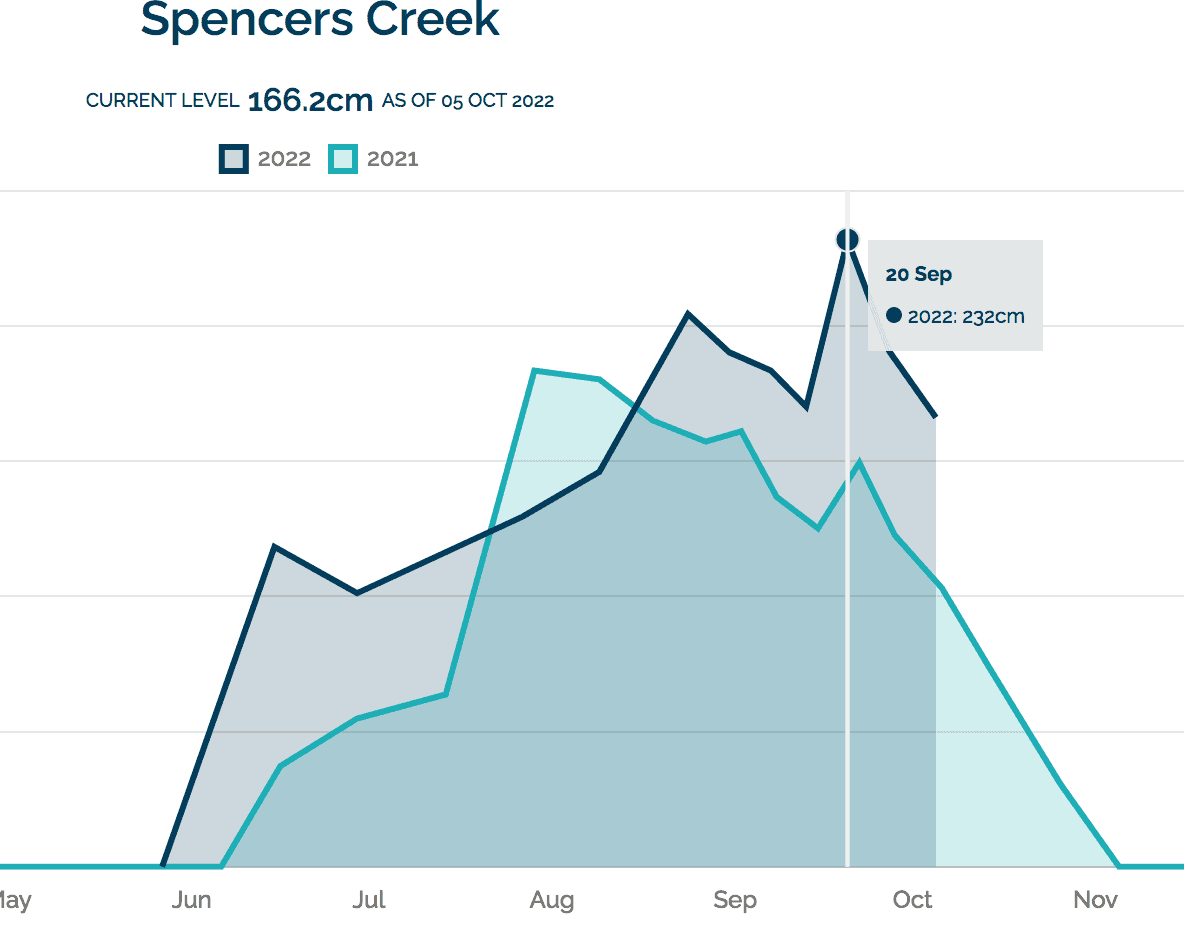 As it turned out after the two big pre-season storms we had another three multi-day snow storms during the season and two big rain events. While the mild winter temps meant the snow rarely fell below 1550 metres, the mid-to-upper mountain cover has been over a metre for most of the season, and today’s Snowy Hydro reading is 166.2cms, not bad for October 5th.

While the 2022 winter may not go down in the annals for delivering the quality snow we enjoyed in 2018 or the back half of 2017, there were plenty of good days this winter and after the past two seasons it was just nice to enjoy the freedom of the mountains again. Hope you managed to get up there and get in a few turns.

Here are the 2022 highlight videos from the resorts: