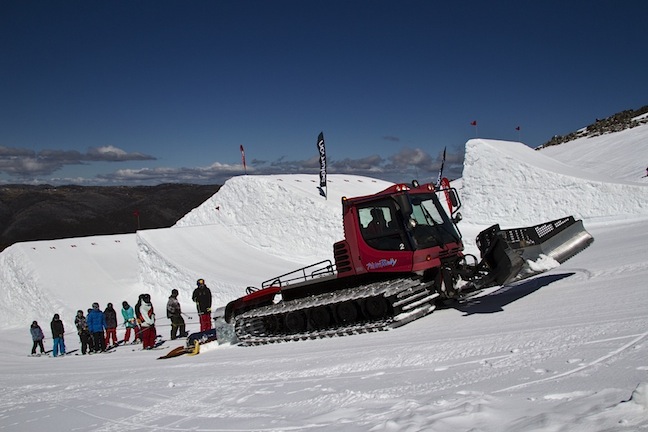 No one but Al Roker could have predicted better conditions to get down and dirty in Thredbo on day three. When the athletes turned up under breathless sunny skies, they all knew this might be their last chance to put themselves in the direct path of the $10,000 cash. It was now or never and it was time to throw down.

Progression was the word of the day with riders collecting new tricks for their bag of goodies. Defying all means of comprehension, these freeskiers were in their element and pushing boundaries like their lives depended on it.

Gus Kenworthy left no opportunity untouched. Having hit the jump well into yesterday’s late afternoon, today he showed the world why he is the current AFP overall champ, with effortless switch double cork 1440’s amidst a flurry of grabs.

Victorian Anna Segal gave us true insight into why she is the only female finalist in this event. Not only going bigger with every hit, from 3’s to 5’s and then landing her first ever 900, what loomed large yesterday was conquered and dominated today. She was our unstoppable Aussie and promising Sochi Olympic gold medalist.

It didn’t stop there as 2010 AFP overall champ and Salomon team rider Bobby Brown made us question our own eyesight and replay the take again and again. Stomping a switch right 1260 mute grab for the second time ever, he left the camera crew and his fellow athletes lost for words.

“Russ Henshaw dared me… enough said, it was time to mix it up and nail this trick,” Bobby said.

Jesse explained his game plan, “So far I’ve been trying to stomp both a technical trick as well as the crowd pleaser. It’s hard to know what the public are going to be looking for when it comes to voting.”

From September 12, you, the public, have three weeks to vote online at http://www.onehitwonderevent.com for your single favorite big-air trick. You will go into the draw to win the ‘Ultimate Winter Package’ worth over $10,000, and the winning athlete with the most votes will take home $10,000 in cold hard cash, the biggest first place prize on the Australian Alpine event calendar.