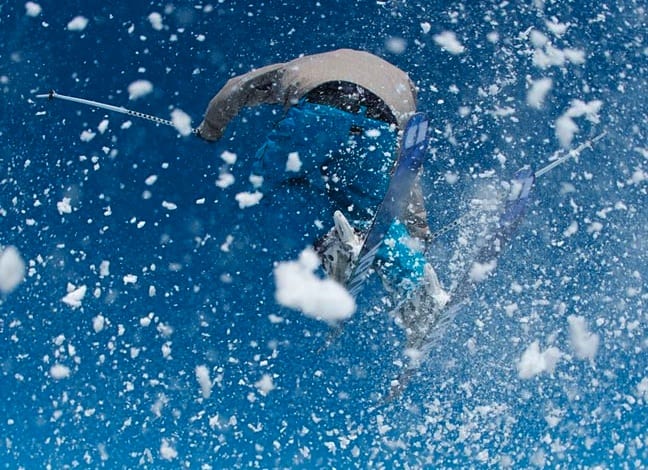 Johnny Lipzker creating his own snowstorm in Perisher on 22 August. Image:: Harro

In a season of contradictions we muddled through an almost dry July with record setting snowmaking and plunged nose first into the face shots of August.

Every Australian skier and snowboarder will remember where they were for the drought-breaking snowfalls that heralded the beginning of August – especially if they weren’t able to partake of the first powder of the year – and for those who rode any of the many days claimed as ‘day of the season’ the grins are still lingering.

2010 showed Australia still has it. August claimed the highest monthly snowfall total for 18 years, over 2m in 31 days, and July provided the conditions for a snowmaking effort so epic the average blue-run enthusiast would hardly have known that beyond the snow guns thing were bare. Our state of the art snowmaking systems are proving to be well worth the investment as they carry the industry successfully into the new decade. 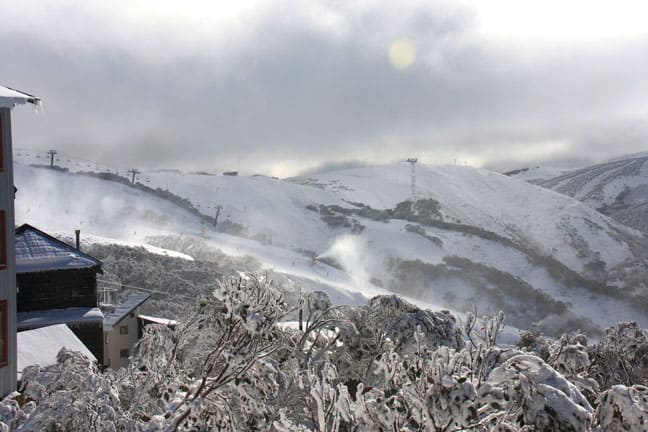 Quantifying the best five snowfalls of the season isn’t easy, while measurements are the fundamental guide, establishing where one fall begins and ends and looking across all the resorts with their sometimes very different snow levels complicates things. However, here are the standouts as we recorded them, reminisce, and keep that grin lingering a little longer.

Just days after the season opened – with the best snow cover seen in many years – the June 18 snowfalls made us all certain 2010 would be a cracking season. Around 20cm, give or take, was recorded across the resorts on this and the surrounding days. 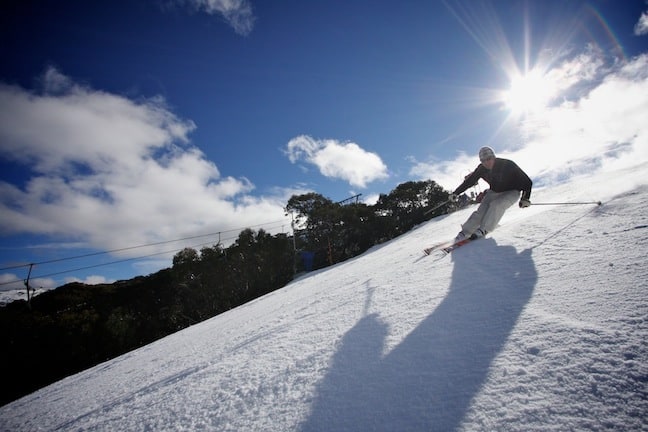 It was the 24cm in 24 hours snowfall. 24cm in Hotham, 35cm in Perisher, 30cm in Thredbo and plenty in the other resorts as well. A month befit of snow had jaded the enthusiasts and claims this would be the season had quietened but this looked to be the start of something good and, coming on the end of the school holidays, the snow gave everyone the inclination to get amongst it. The snow was good, but the lift queues were abysmal. 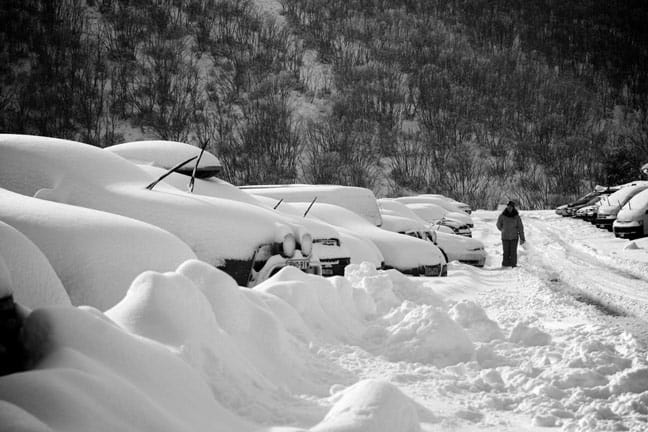 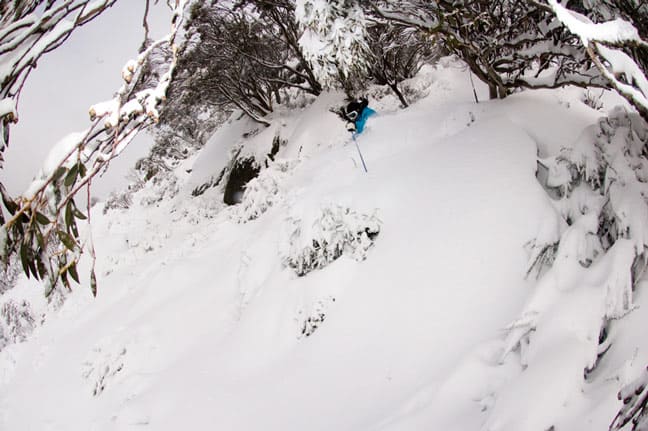 Scott Kneller was quick to score some tree pow when the snow fell in Thredbo on 15 July. Image:: Ben HansenSee the full snow journal here 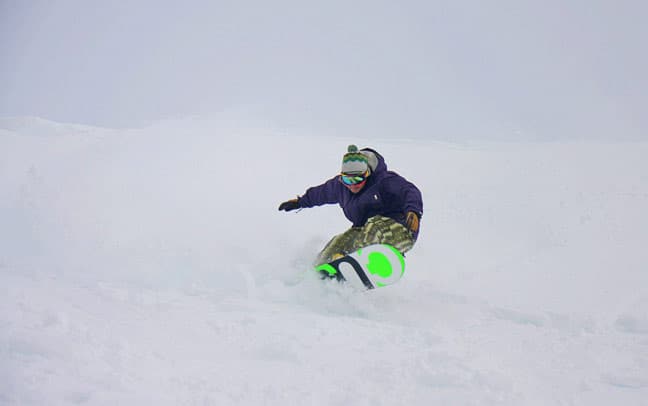 Goodbye Dry July, hello Awesome August. As the month rolled over the snow rolled in, and in. The first 24 hours of the month saw over 50cm deposited across NSW and Victoria. By 4 August Thredbo was calling it a 1.2m storm and the other resorts had impressive totals as well. And this wasn’t just snow, it was the kind of yielding powder one flies 10 000km for. Everyone who rode it will remember it and those stuck elsewhere watching history unfold on snow cams will feel the sting of disappointment for a long time.

GoPro HD Hero cameras were used to make this video. 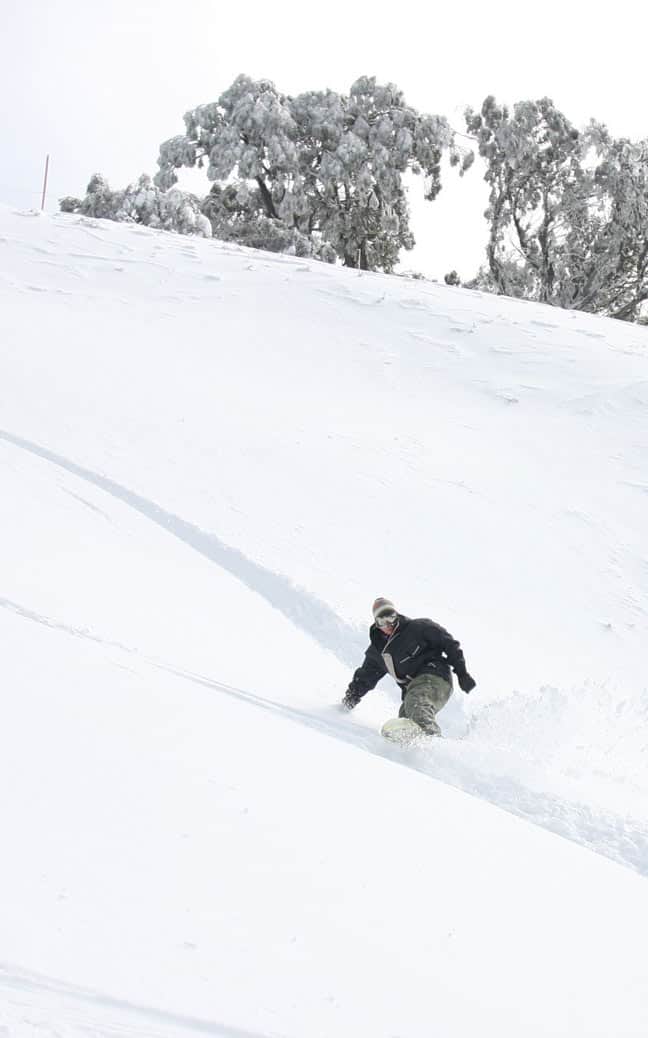 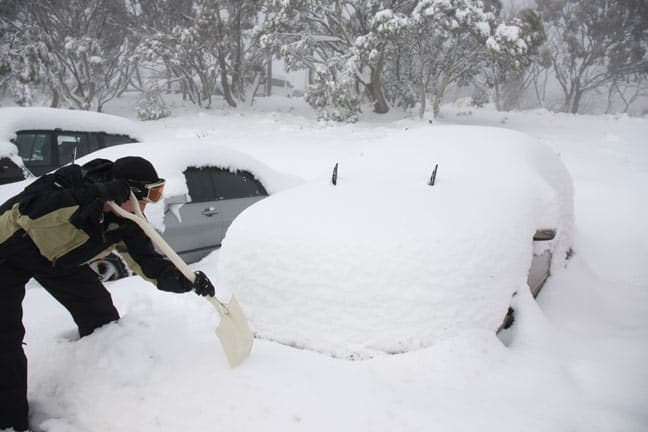 As the snow from the month’s first snowfalls packed down to a solid base the second dumping came through, dropping an average of 20cm across the resorts, the following days were also spattered with snow, interspersed with bluebird mornings that made for perfect conditions to enjoy the perpetually topped up pow. 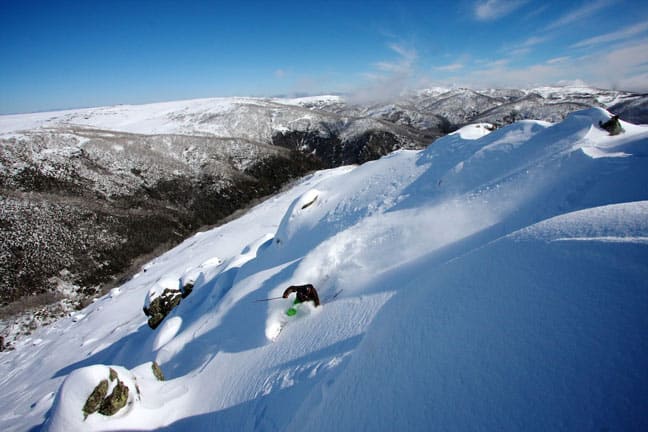 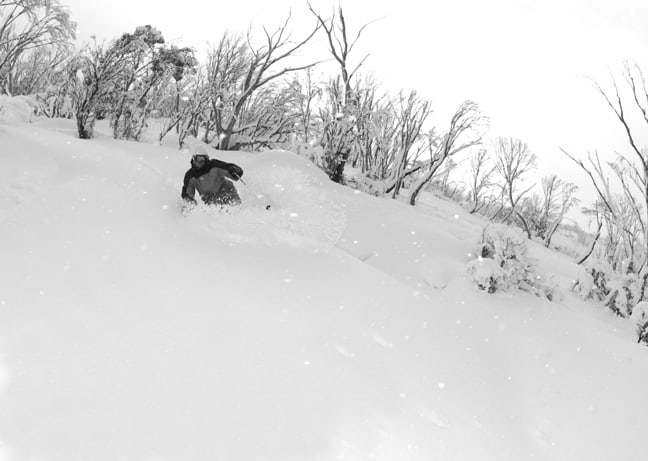 Jordan Houghton got amongst it in Thredbo on 12 August. Image:: Ben HansenSee the full snow journal here 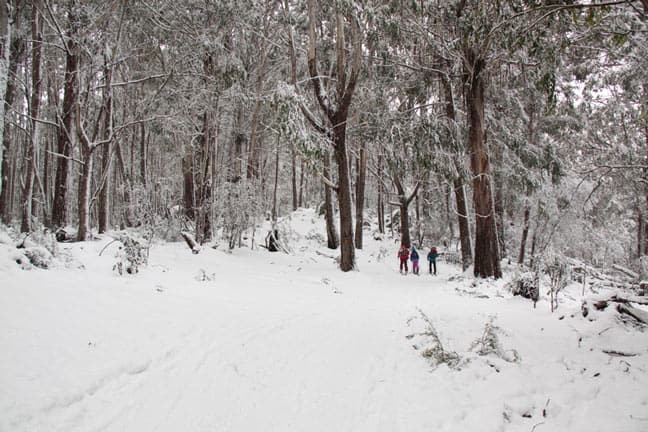 Joey Corcoran, Watkin McLennan and Nat Segal hiked up Mt Stirling to make the most of the freshies. Image:: Joey CorcoranSee the full snow journal here

Even those who’d skied every day of the season called 21 August the standout. Double digit snowfalls everywhere and a deep cover down low meant all the best terrain was in peak condition from top to bottom and everyone could revel in freshies all the way to the valley floor. August had proven itself. 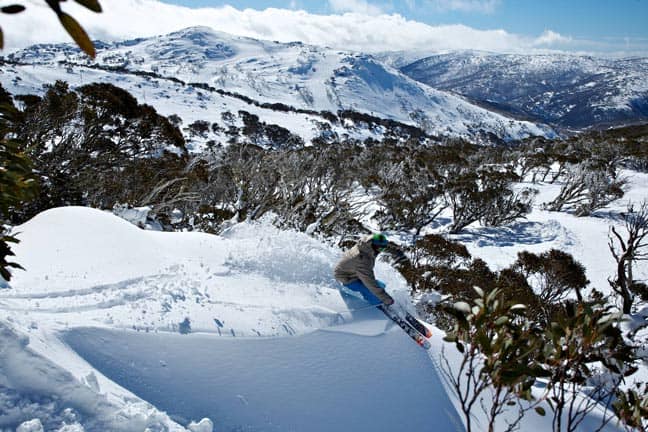 After the 48 hour snow onslaught Sunday 22 August dawned sunny and Johnny Lipsker was quick to get out there. Image:: HarroSee the full snow journal here 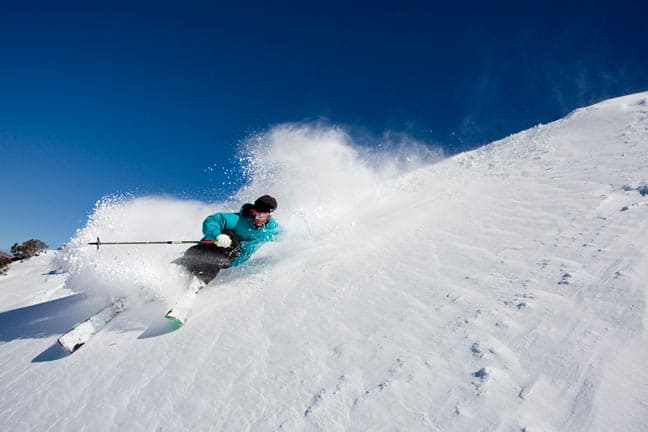 Chris Booth was in Thredbo for the Rip Curl Pro and managed to score the sunshine after the storm on the 22nd. Image:; Dominic KielerSee the full snow journal here

With barely time to draw breath Mother Nature was at it again, sending the month off as she’d brought it in, with a half metre snowfall that pushed the monthly total over 2m, the highest for 18 years. “Powder day of the year, if not the decade” wrote Bill Barker in the Hotham snow report. Once again the quality of the snow made us all wonder if Mother Nature had perhaps lost her way en route to Japan or Utah as we dived in for that all too elusive Australian face shot. 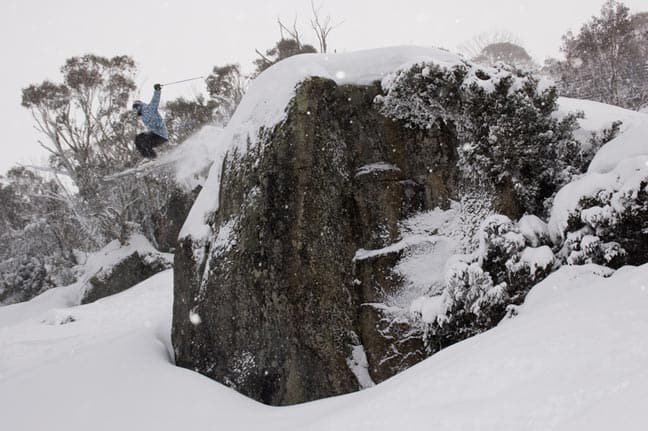 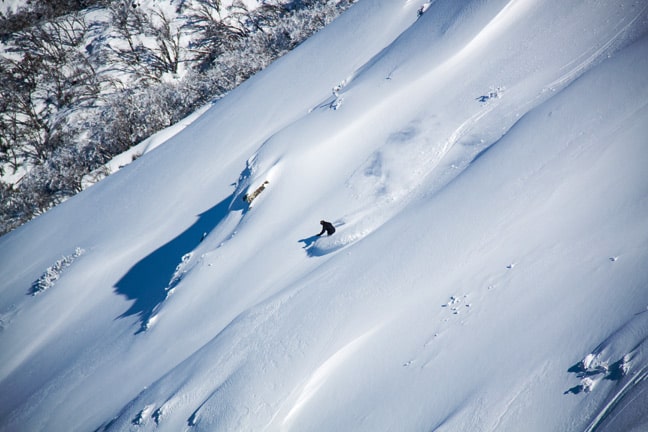 The sun shone in Buller on 28 August and the freshies were there for the taking. Image:: Joey CorcoranSee the full snow journal here 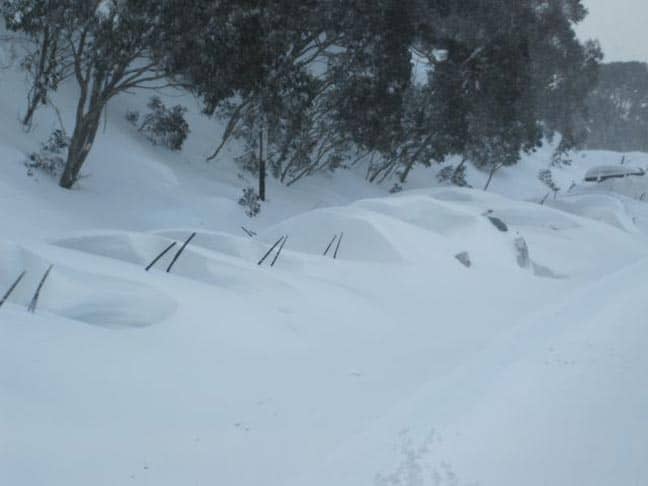 So there is is, season 2010 in snow storms. There were other snowfalls of course, the pre-season snowflakes that had Opening Weekend look so good, the little top-ups that carried September and every second day in August, but these were the standouts.

How do you remember the storms of 2010? Tell us about it in our comments section below!