Gnar (adj.): A shortened version of the word gnarly, meaning high on the scale of dangerousness and coolness. – Urban Dictionary.com

Taking it’s name from the latter definition, take a look back at this iconic film by Scott & Robb Gaffney and the legendary Shane McConkey.

The game of Gnar was largely conjured up by McConkey himself, but as the film alludes – M.N.A.R. – doesn’t quite have the same ring to it…

This childish game found its way from Squaw Valley to a chapter in a book by Rob Gafney called Squallywood. Also described as, “the Squaw Valley bible,” it is largely recognized as the best ski resort guide ever written.

In short, the game involves scoring as many points as possible over a certain time period by attempting dificult lines (each given a numerical score in the book) and earning bonuses by doing absurd and funny acts.

How to score points (just some examples):

Mum Call (500 points): Call your mum while you’re riding a gnarly line. Anyone can kill tough runs – but this shows you can do it without a second thought.

Radness Yell (200 points): Before dropping into a line wave your arms vigorously in the air and yell out: “Hey! Check me out! I’m going to rip the s**t out of this!”

Pole Whacker (200 points): Vigorously whack your pole above a line for at least 30 seconds. Riding the line is not then required.

Steal Clothes (200 points): Steal the clothes of any competitor completing a ‘Butt Naked’.

Talk Smack (200 points): In a serious tone, without laughing, and just before dropping into a line, get the attention of a nearby stranger and say: “Hey. I’m better than you.”

Butt Naked (5000 points): Complete any full line butt naked. If you are jailed, you lose your lift pass or your clothes are stolen, you lose all your points.

First Chair (5000 points): Get the first chair lift on a powder day. 3,000 extra points on offer for cooking breakfast while you’re in the queue.

Ego Claim (500 points): After finishing a line, ski over to a group of strangers and shout ‘I’m the best skiier on the mountain.’ Also possible at the start of any chairlift ride with strangers.

Pro Call Out (500 points): Yell to any pro (or perhaps skiing instructor) – ‘Hey, I can’t believe you’re a pro! I’m totally better than you are!”

Fart Claim (500 points): Produce a fart in crowded gondola or equivalent and loudly state: ‘That was me!’

How to lose points:

Pass Pulled (-5000 points): A particular issue if you’re taking on the Butt Naked.

Tomahawk (-2000 points): Rolling two or more times after a crash.

“The radder you are and the more you embarrass yourself, the more points you’re going to get” – Greg Lindsay (Squaw Local)

After McConkey’s death in 2009, skiers gathered in Squaw to compete in the first ever ‘official’ game of G.N.A.R. Twenty skiers were set to compete over two weeks, with a $25,000 prize purse up for grabs… See how it all went down in the full film above.

Want to head to the land of GNAR yourself, check out our Mountainwatch Tour to Squaw Valley and read editor Reggae Elliss’s recent guide to Squaw here – a place he’s visited for the past five years in a row. 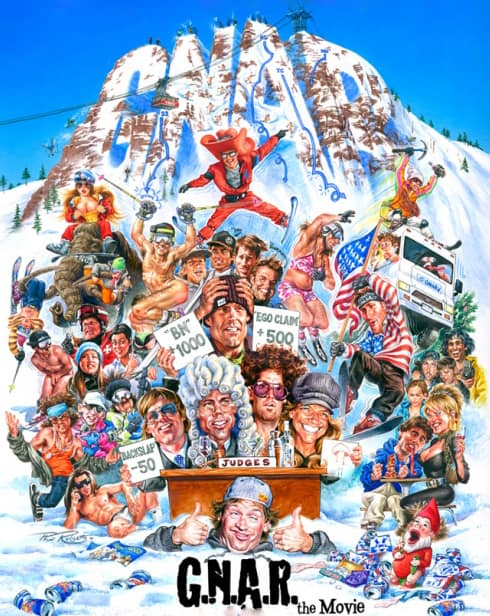